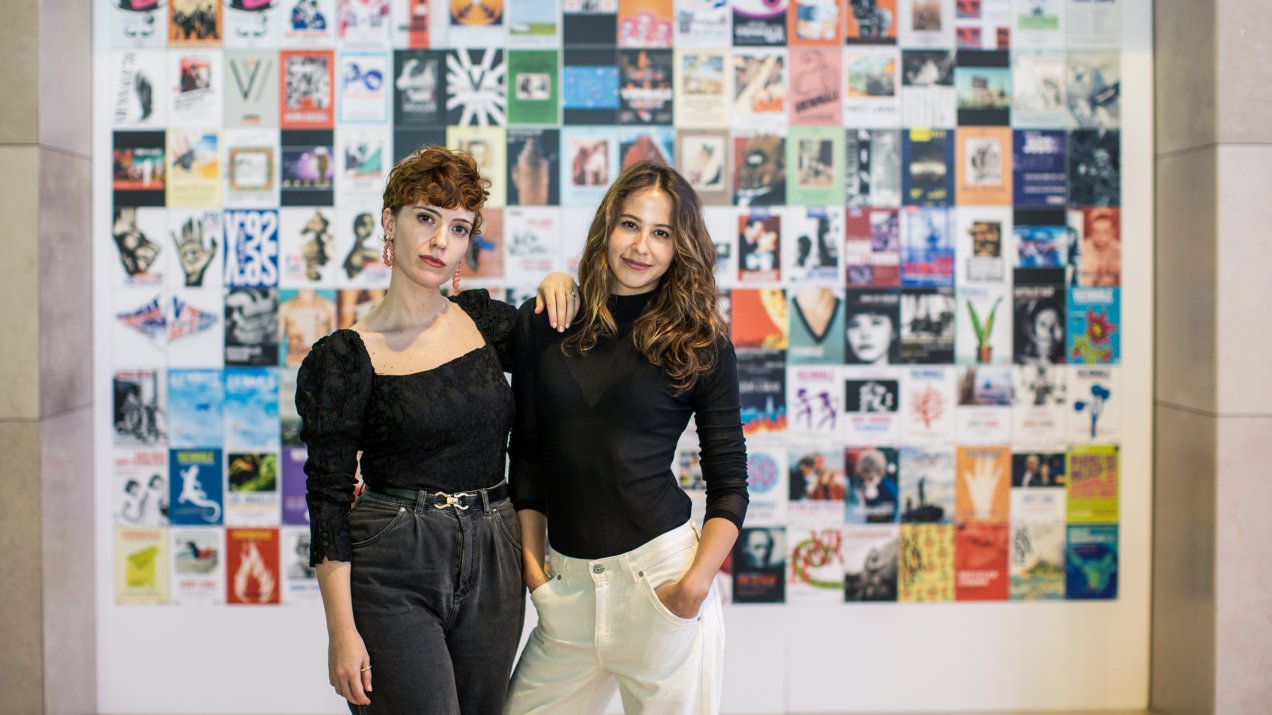 Nobody asks a painter: Did you paint this sunflower to change the world? - But they ask a filmmaker, and I think that's unfair. 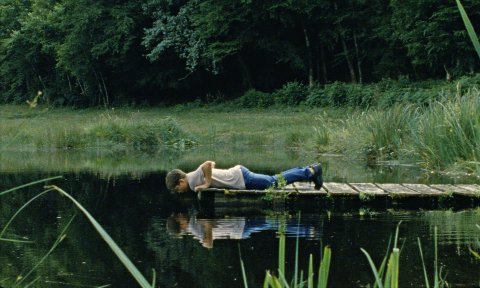 ASTRAKAN
R: David Depesseville
SAT, 29.10. 8.45 pm: STADTKINO IM KÜNSTLERHAUS
SUN, 30.10. 4 pm: URANIA
A tough-but-tender evocation of rural childhood as seen through the eyes of its waywardly precocious protagonist, ASTRAKAN ranks high among this year’s most impressive debuts. It takes place among the rugged splendors of Morvan, a Dordogne region which has long been favored by the Parisian authorities as a preferred destination for the raising of foster-children: literary giant Jean Genet is the most famous example. Based on his research into the “Morvan children,” writer-director David Depesseville crafts an engrossing, empathetic and entrancing character-study built on the slender shoulders of outstanding newcomer Mirko Giannini. He is front-and-center throughout as Samuel, whose foster-parents Marie (Jehnny Beth, of British rock-band Savages) and Clément take in children for reasons more financial than altruistic. When Samuel’s complex psychology and his nurturing needs prove beyond this young couple, he is sent to live on Marie’s parents’ farm; this proves to be less than the safest of havens. A coming-of-age story of unusual intelligence, stylistic distinction and formal originality, ASTRAKAN is named after the prized dark fleece of newborn lambs: a seed of symbolism which finds full flowering in Depesseville’s remarkable, operatic finale. (Neil Young) 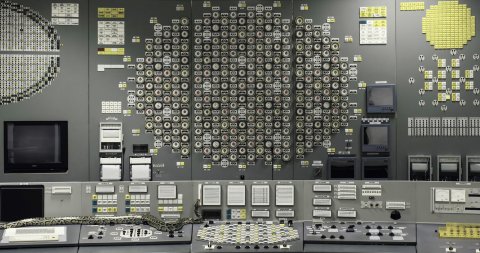 KAPINYNAS
R: Emilija Škarnulytė
SAT, 29.10. 6.30 pm: URANIA
MON, 31.10. 1.30 pm: METRO, HISTORISCHER SAAL
Who could imagine that an experimental documentary about the dismantlement of the world’s largest nuclear plant could also extend to include a survey of 20th century painting, a political statement, a site for meditation and a philosophical song about annihilation and creation being parts of the same process? Lithuanian filmmaker Emilija Škarnulytė could imagine precisely that and did so accordingly, and her vision is so spellbinding that it shows how the finest lessons of 2001: A SPACE ODYSSEY in merging art and science can be creatively applied, as can those from the early films of Alain Resnais in executing slow, steady and hallucinatory camera crawls across, into and around documentary subjects. “In my films from the last ten years,” she has said, “I have mostly researched places where contemporary political issues are staged between human and non-human worlds, the shifting boundaries between ecological and cosmic forces. I want to feel out all kinds of non-human and post-human scales in the depths of space and time.” Thus her opening images offer rocks that resemble planets, a voluptuous nuclear explosion is rhymed with trees and a snake slithering around the same circuitry previously traversed by her camera becomes a bold Surrealist encounter. (Jonathan Rosenbaum) 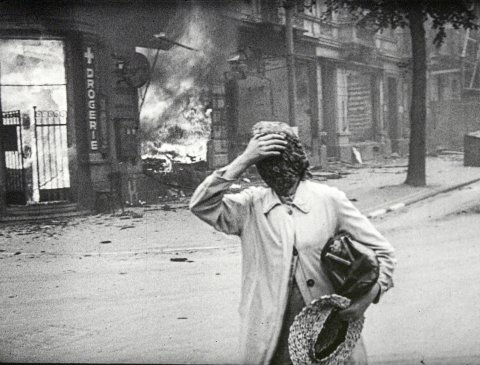 THE NATURAL HISTORY OF DESTRUCTION
R: Sergei Loznitsa
SAT, 29.10. 8.30 pm: URANIA
SUN, 30.10. 3.30 pm: METRO, HISTORISCHER SAAL
“When the storm bursts over Germany, they will look back to the days of Lübeck, and Rostock and Cologne as a man caught in the blasts of a hurricane would look back to the gentle zephyrs of last summer.” This British comment on the massive aerial attacks on Nazi Germany expresses a controversially discussed topic regarding the Second World War. Is it morally justifiable to expand warfare to directly affect civil society in order to defeat a rogue regime? In his latest documentary, Loznitsa refers to a book by German writer W.G. Sebald, who raises this very question, which still resonates to this day. Loznitsa’s film expands the same question to the realm of cinema by way of an experiment: compiled from German and British historical film footage, without any comment or ideological bias, the Ukrainian filmmaker confronts his audience with a cycle of war and death. Instead of differing between the political sides, the film indicates two other categories: the technocratic (propagandistic) image of the apparatus belli that consists of procedures and representational codes – and the image of humanity, when women in ruins look into the camera, when refugees without shoes carry their belongings, when dead bodies lie in the streets as people pass by. Can cinema answer Sebald’s question? (Gunnar Landsgesell) 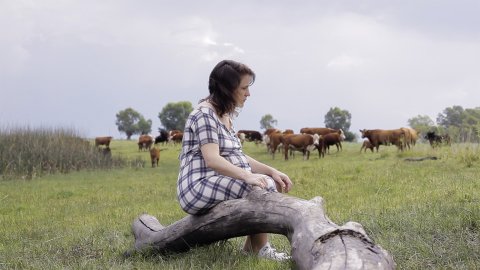 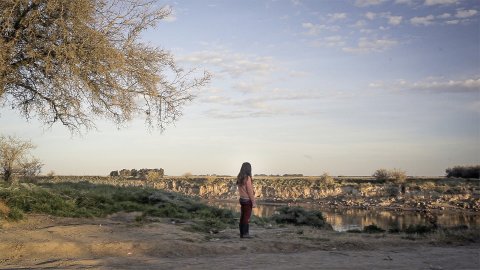 TRENQUE LAUQUEN - TEIL 1 & TEIL 2
R: Laura Citarella
SA, 29.10. 11.00 am: METRO, HISTORISCHER SAAL
Laura Citarella makes a poignant and whimsical entry into the ranks of New Argentine cinema with her latest, expansively narrated feature TRENQUE LAQUEN. Fans of Argentine directors such as Mariano Llínas and Alejo Moguillansky, who share the film’s screenwriting and editing credits respectively, will recognize the characteristic richly meandering storytelling, which draws on multiple quirky characters and a healthy dose of meta-humor and self-irony. In Part I, Laura (Laura Paredes, who co-wrote the script), the film’s protagonist, goes missing, sending her pragmatic jilted boyfriend and her stone-faced, yet infinitely sensitive co-worker on a quest to find her. Laura is a woman of two-pronged passions: a dedicated plant researcher, she becomes entranced with a story of a highly erotic and tormented love affair between a young female biologist and a married man. TRENQUE LAQUEN I takes viewers on a journey through the eponymous provincial municipality southwest of Buenos Aires, during which ordinary landscapes, understated pitstops and situations are turned into the stations of an engrossing mystery. At its heart lies the human yearning for the extraordinary: an existential discovery plot that could forever change our lives. (Ela Bittencourt)

SOME OF GUESTS TODAY