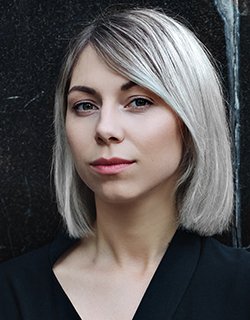 Emilija Škarnulytė  (b. Vilnius, Lithuania 1987) is an artist and filmmaker. Working between documentary and the imaginary, Škarnulytė makes films and immersive installations exploring deep time and invisible structures, from the cosmic and geologic to the ecological and political. Winner of the 2019 Future Generation Art Prize, Škarnulytė represented Lithuania at the XXII Triennale di Milano. Recent solo exhibitions include Tate Modern (2021), Kunsthaus Pasquart (2021), and the National Gallery in Vilnius (2021). Her films are in the IFA, Kadist Foundation and Centre Pompidou collections and  have been screened at the Serpentine Gallery, The Museum of Modern Art, New York, and numerous film festivals. She is a founder and co-director of Polar Film Lab, and a member of artist duo New Mineral Collective.