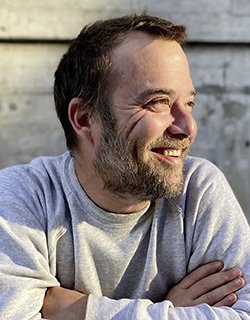 Born in 1976 in Nevers, David Depesseville soon took a strong interest in cinema and its ability to tell stories. After studying cinema in Montpellier, he started analyzing the link between memory and cinema. He worked as a first AD on many projects, including Sophie Letourneur’s movies. Depesseville then directed his first movie in 2005, Ci-gît l’amour (ECCE films); he adapted Beckett in a second self-produced movie, Le Dépeuplé; he worked on his third movie Les Lendemains qui chantent (Les Films de la Riposte) at the request of the rock band Les Thugs. In 2012, he directed his fourth movie La Dernière Plaine (Les Films de la Riposte). His first feature film, Astrakhan, directed in 2021 and produced by Tamara Films, explores further themes he previously worked on, such as childhood, countryside chronicles, musical editing and sensorial tales.