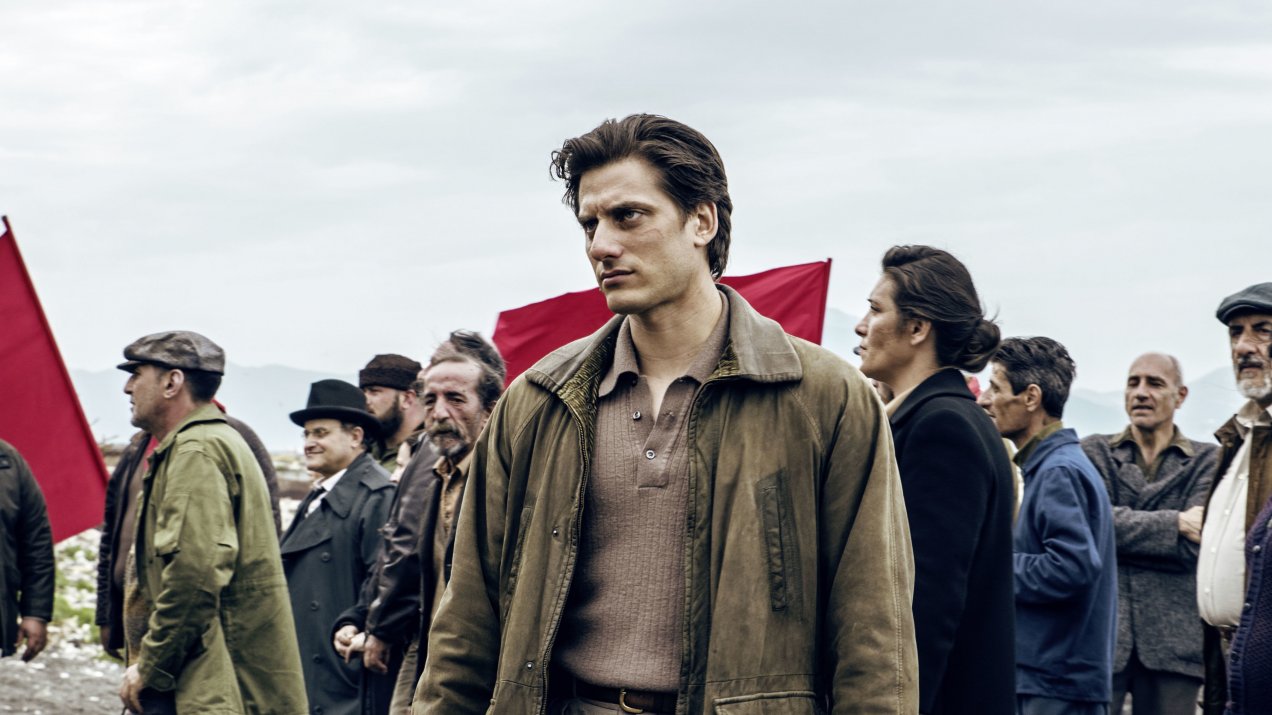 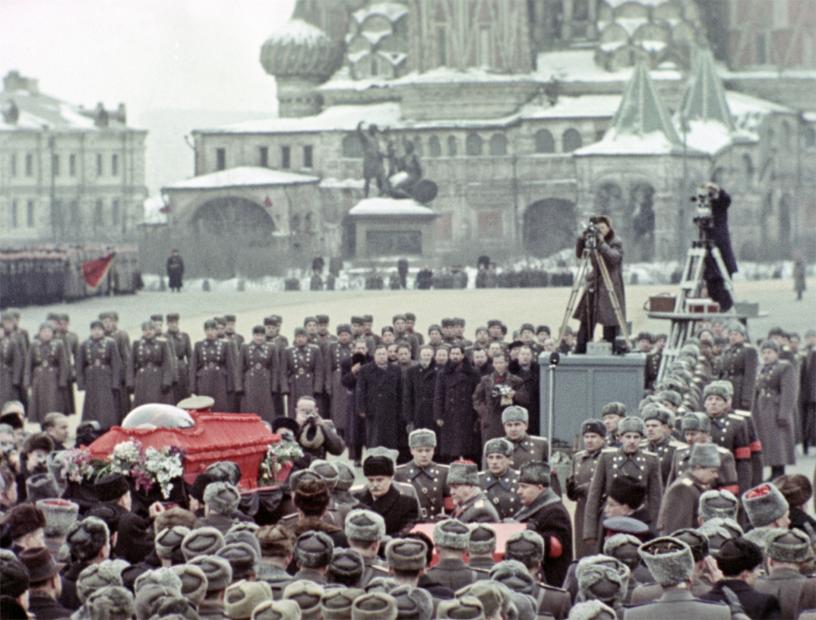 STATE FUNERAL
NL/LIT 2019, 135 min, Russian OV with English subtitles, D: Sergei Loznitsa
Joseph Vissarionovich Stalin died on March 5, 1953. His death took place out of sight, but its aftermath could not have been more visible. From reams of existing footage of this very public spectacle, most of which unseen and now painstakingly restored, Sergei Loznitsa has forged a heady distillation of his STATE FUNERAL as seamless as it is staggering...
In the presence of Sergei Loznitsa.
Tickets & info: 4.11., 15:00, Gartenbaukino 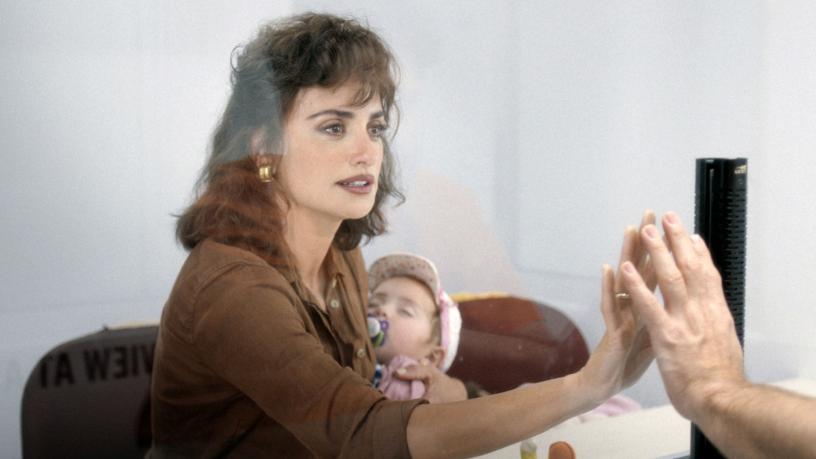 WASP NETWORK
Brazil/F/E/B 2019, 123 min, OV with English subtitles
D: Olivier Assayas, Cast: Penélope Cruz, Gael García Bernal, Edgar Ramírez
Assayas ventures into a star-studded espionage adventure. However, he focuses more on the private lives of his protagonists than on their work around an attempt to overthrow the Castro regime. The result is a fascinating jigsaw puzzle, which naturally also sees itself as a documentary history lesson.
Tickets & info: 4. 11., 18:00, Gartenbaukino 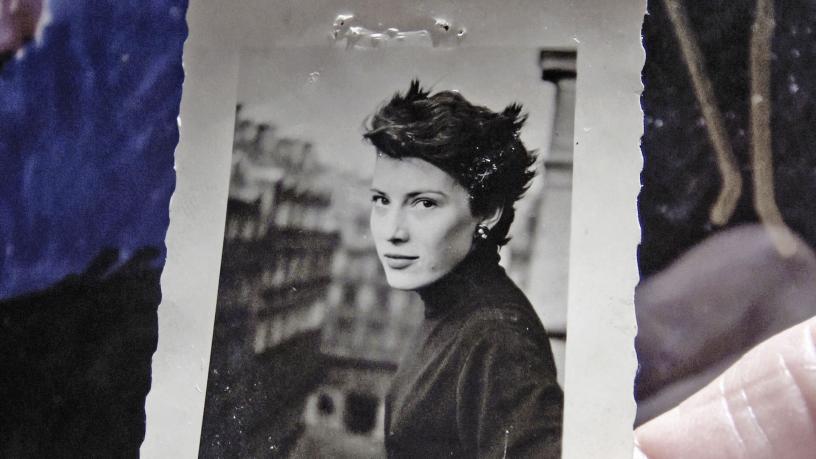 ÊTRE VIVANT ET LE SAVOIR (LIVING AND KNOWING YOU’RE ALIVE)
F 2019, 82 min, OV with English subtitles, D: Alain Cavalier,
Cast: Alain Cavalier, Emmanuèle Bernheim
The most beautiful movies can be the saddest. And vice versa. Alain Cavalier has been writing and shooting for the cinema for fifty years, is now eighty-eight years old and knows all about life. In ÊTRE VIVANT ET LE SAVOIR, which he also comments on with his unmistakably carried voice, he wants to make a film with the writer Emmanuèle Bernheim (1955-2017), with whom he has had a deep friendship for thirty years. A film like a quiet souvenir, a wonderful attempt at holding on and letting go.
Tickets & info: 4.11., 16:00, Stadtkino im Künstlerhaus

POR EL DINERO (FOR THE MONEY)
Argentinia 2019, 80 min, OV with English subtitles, D: Alejo Moguillansky
Cast: Alejo Moguillansky, Luciana Acuña, Matthieu Perpoint
Of course, the theatre troupe in Moguillansky's art satire is not interested in earning money. After all, they know that artistic creation in Latin American countries is badly paid - and sometimes simply not at all. After all, even the play performed by the troupe deals with the difficulties of economic survival in capitalism. But does art have to cost life? The film begins as a crime thriller with several corpses. A voice with a French accent promises to tell the story of how the theatre troupe got this far. Will this promise be kept? See for yourself.
In the presence of Alejo Moguillansky.
Tickets & info: 4.11., 20:30, Stadtkino im Künstlerhaus • 5.11., 13:30, Urania 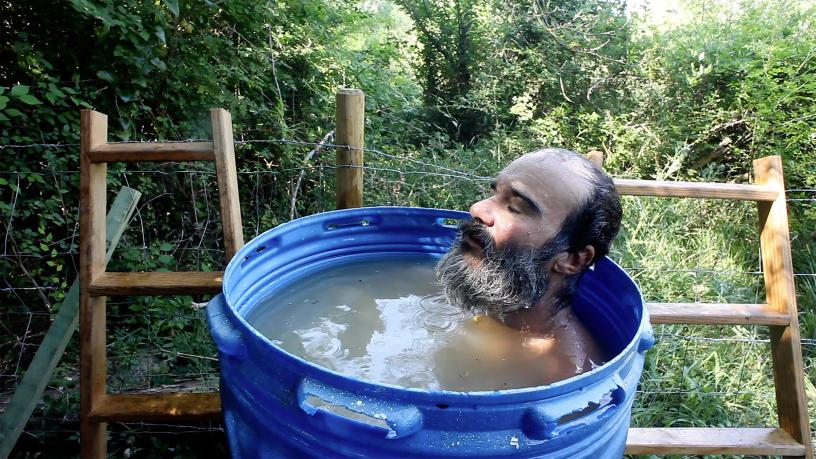 ZUMIRIKI
E 2019, 122 min, OV with English subtitles, D: Oskar Alegria, Mit: Jesus Alegria
As the heir to a river bank that disappeared in the floods of a reservoir, Alegria undertakes a radical poetic attempt to call up a space of childhood memory by wanting to get lost himself. Determined not to decipher a secret, but to find a deeper one, he becomes increasingly part of the surrounding fauna in the self-built hut on the shore in front of the lenses of his night vision cameras. As the beard grows and the body circumference shrinks, the current under the cormorant screams carries the pathetically exposed message in a bottle back to the sender. An autobiographical film poem and at the same time a tender homage to the declining pastoral world of the Basque Pyrenees.
In the presence of Oskar Alegria.
Tickets & info: 4.11., 21:30, Metro, Historischer Saal • 5.11., 20:30, Metro, Eric Pleskow Saal 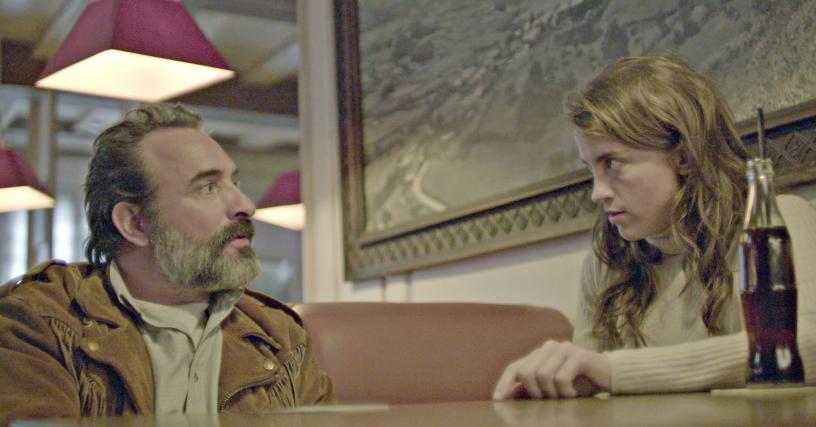 LE DAIM (DEERSKIN)
F 2019, 77 min, OV with German Subtitles, D: Quentin Dupieux
Cast: Jean Dujardin, Adèle Haenel, Albert Delpy
A wild round dance of absurdities around the melancholic George, who falls in love with his newly acquired leather jacket and strolls through the mountains as a would-be filmmaker. Jean Dujardin and Adèle Haenel have seldom been seen playing in such a relaxed manner. And hidden behind all this madness: clever thinking about power and obsession.
Tickets & info: 5.11., 13:00, Gartenbaukino 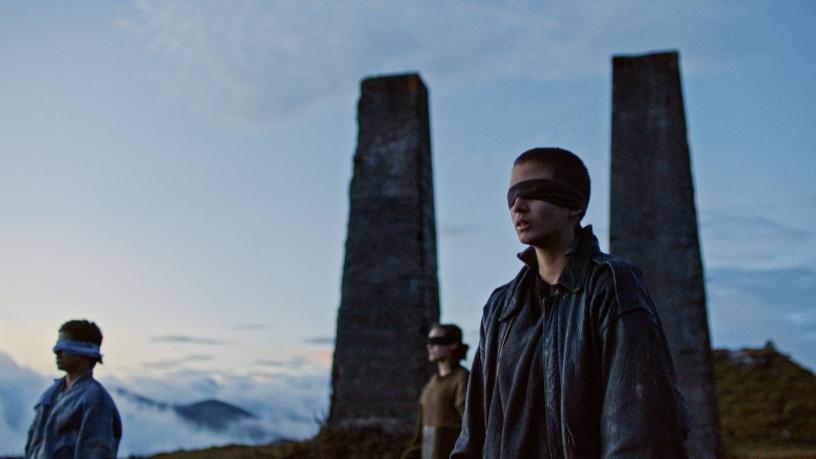 MONOS
Columbia/Argentinia/NL/DK/D/S/Uruguay 2019, 102 min, OV with German subtitles
D: Alejandro Landes, Cast: Moisés Arias, Sofía Buenaventura, Julianne Nicholson
Latin America, present: A paramilitary teenage unit guards a hostage on behalf of a rebel organization. Powerful and vibrant, sound and image convey the threat and disturbance of a youth that is getting out of hand.
Tickets & info: 5. 11., 15:30, Gartenbaukino 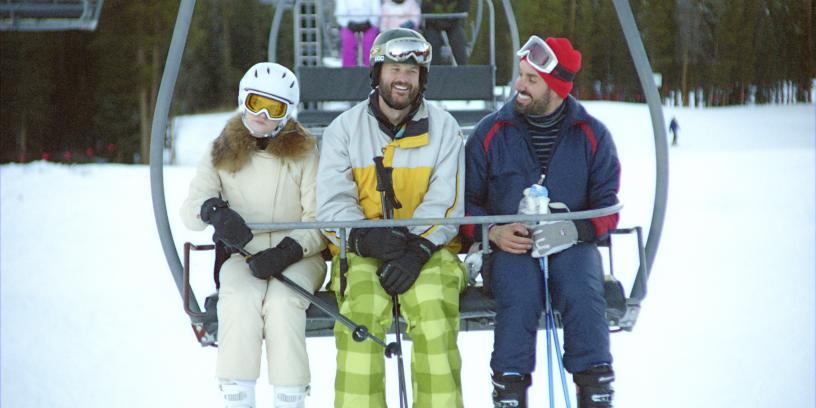 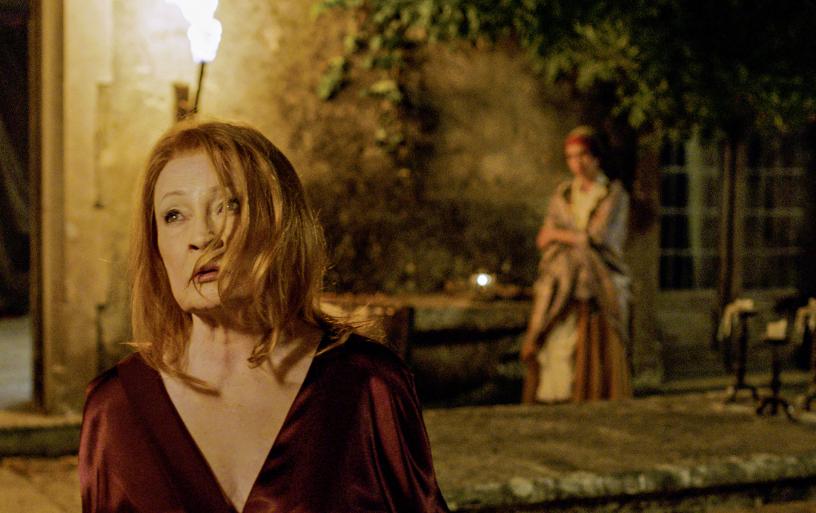 A PORTUGUESA (THE PORTUGUESE WOMAN)
P 2018, 136 min, OV with English subtitles, D: Rita Azevedo Gomes
Cast: Clara Riedenstein, Marcello Urgeghe, Ingrid Caven
In the forests of Trento, leaning against ruins, Ingrid Caven fervently sings minstrels. From Walther-von-der-Vogelweide score to the medieval natural setting, A PORTUGUESA (according to Musil) is both reduced and eccentric. The title-giving Portuguese woman was brought to his castle by Lord von Ketten, who, despite her grace, immediately set off for battle again. The peace agreement will be his greatest crisis. Gomes patiently tells of the waiting years of her heroine, who neither wants to surrender to fate nor to the man who has returned.
In the presence of Rita Azevedo Gomes.
Tickets & info: 5.11., 18:30, Urania • 6.11., 13:30, Metro, Historischer Saal 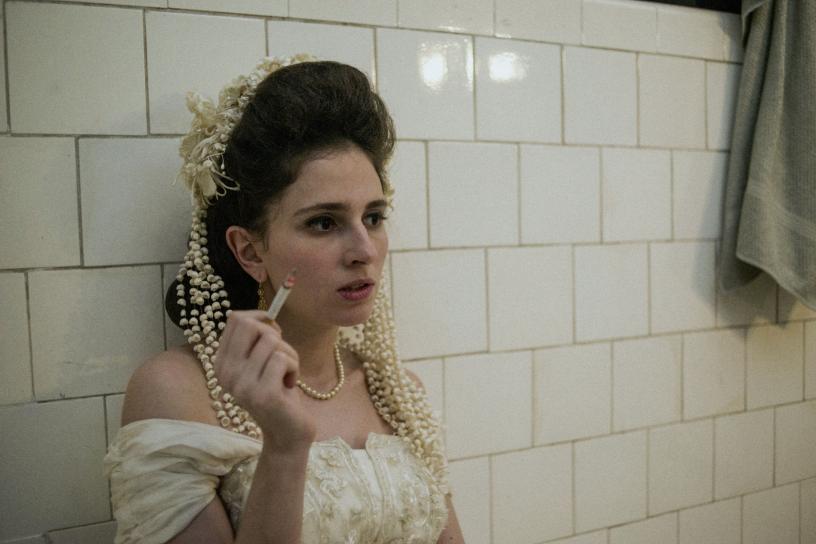 A VIDA INVISÍVEL DE EURÍDICE GUSMÃO (THE INVISIBLE LIFE OF EURÍDICE GUSMÃO)
Brazil/D 2019, 139 min, OV with English subtitles, D: Karim Aïnouz
Cast: Carol Duarte, Fernanda Montenegro, Gregório Duvivier
A colourful and sensual picture rush in the midst of the merciless injustice of the Brazilian patriarchate of the 1950s. In the style of a great melodrama, Karim Aïnouz tells the story of two sisters who are separated from their ruthless father. The one gets into poverty and on the fringes of society, while the other marries and encounters the family's lack of understanding as she pursues a career as a musician. What both would need would be the other. The images of camerawoman Hélène Louvart unfold a fascinating pull between swampy trance and flowing resolution.
Tickets & info: 5.11., 16:00, Metro, Historischer Saal • 6.11., 15:30, Gartenbaukino

JI YUAN TAI QI HAO (NO. 7 CHERRY LANE)
Hong Kong/China 2019, 125 min, OV with English subtitles, D: Yonfan
In his first animated film, Yonfan pays tribute to his homeland Hong Kong and cinema. He tells a triangular story during the student protests in 1967 - which can serve as a mirror of the current political situation - and interweaves contemporary history, ghost story and sensuality with irony and fantasy.
Tickets & info: 6. 11., 13:00, Stadtkino im Künstlerhaus 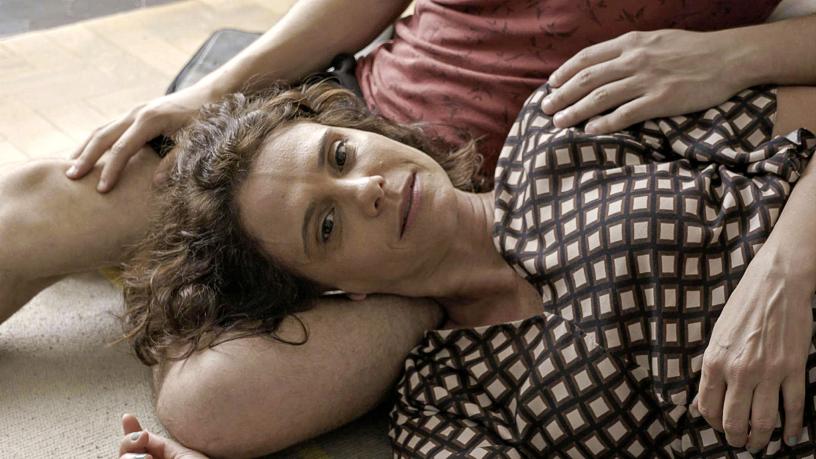 SEUS OSSOS E SEUS OLHOS (YOUR BONES AND YOUR EYES)
Brazil 2019, 119 min, OV with English subtitles, D: Caetano Gotardo
Cast: Caetano Gotardo, Malu Galli, Vinícius Meloni
SEUS OSSOS E SEUS OLHOS, located in the middle-class milieu of São Paulo, presents a series of strictly composed vignettes in which much is said and little is done. A gay director meets a series of people with whom he measures the magic of everyday life in conversations or sexual encounters. With its very own tone, the film focuses on the in-between of the narrative: long close-ups on faces, studies of self-sufficiency and static impressions of theatre rehearsals. The seemingly trivial becomes the essence and the work a cinematographic puzzle between reality and fiction.
Tickets & info: 6.11., 18:30, Metro, Historischer Saal 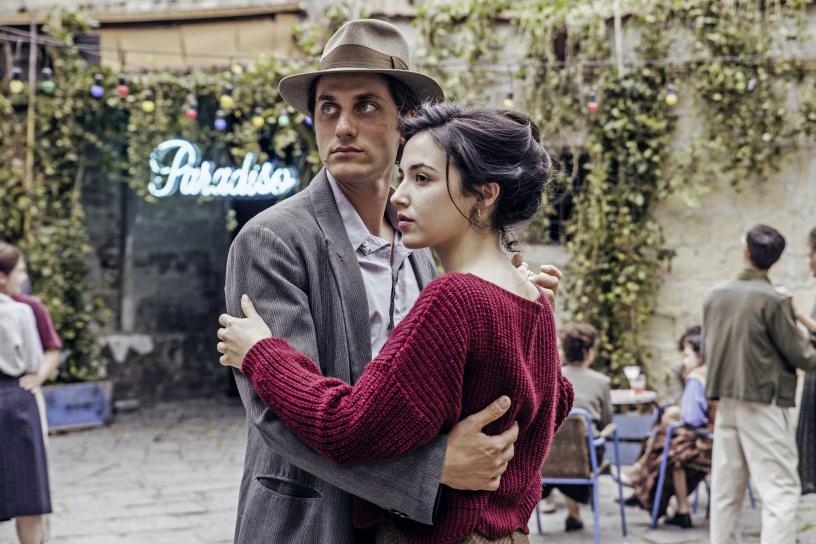 MARTIN EDEN
I/F/D 2019, 129 min, OV with English subtitles, D: Pietro Marcello
Cast: Luca Marinelli, Carlo Cecchi, Jessica Cressy
A man educates himself from an uneducated sailor to a writer. Marcello transfers Jack London's autobiographical artist novel of the same name from the USA to Naples. The history of the 20th century as well as recent political developments meet the highly contagious and furious revolt of an individual.
Tickets & info: 6. 11., 23:00, Gartenbaukino 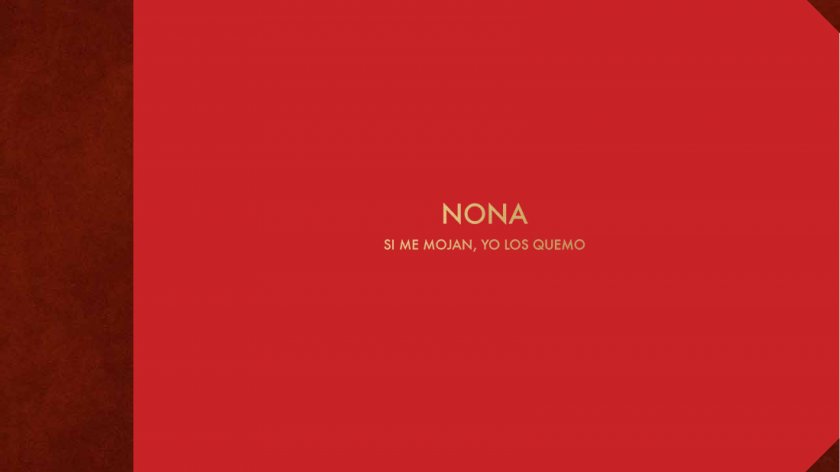 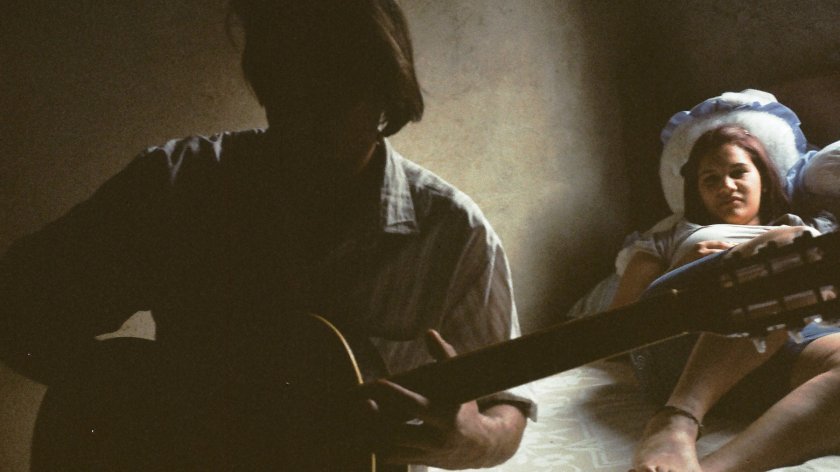 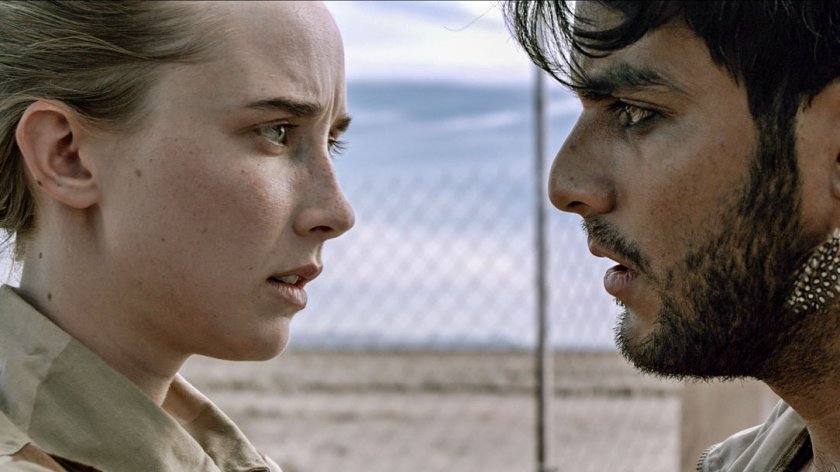 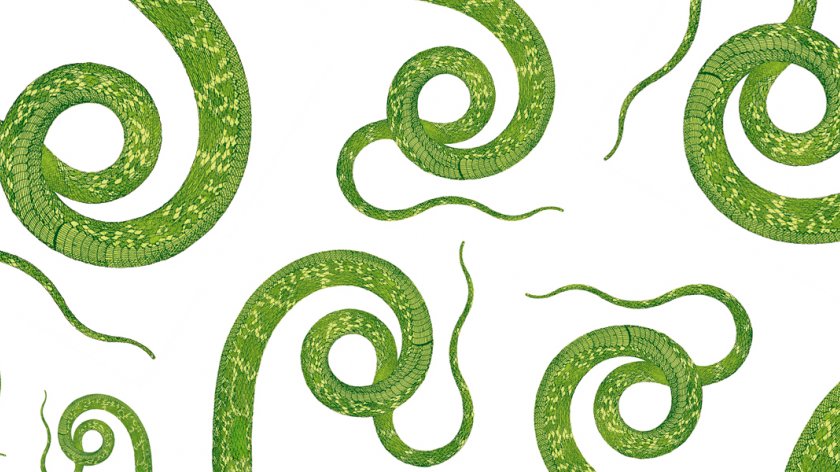 OUTCOME OF THE VIENNALE 2019