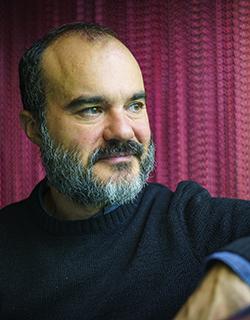 Oskar Alegría is a filmmaker and the Artistic Director of the International Film Festival Punto de Vista in Navarra, Spain. He was professor of documentary scripts in the Masters of Audiovisual Scripts from the University of Navarra. Trained as a journalist, he began working as a reporter in Madrid on news programs for Canal Plus and CNN+. He has been an editor for the television channels Telemadrid (Los Cinco Sentidos - "The Five Senses") and Euskal Telebista (Sautrela). In the area of gastronomic documentary, he has written and co-directed the series “Masters of Basque Cooking” for ETB-telebista. His first film EMAK BAKIA BAITA was shown in BAFICI, Edinburgh, Telluride, San Sebastian, Shanghài, Yamagata, DocLisboa, San Francisco and Denver Film Festivals, has been translated into 16 languages and won 17 awards.
Films: GURE OROITZAPENAK (2018, E), EMAK BAKIA BAITA / THE SEARCH FOR EMAK BAKIA (2012, E)