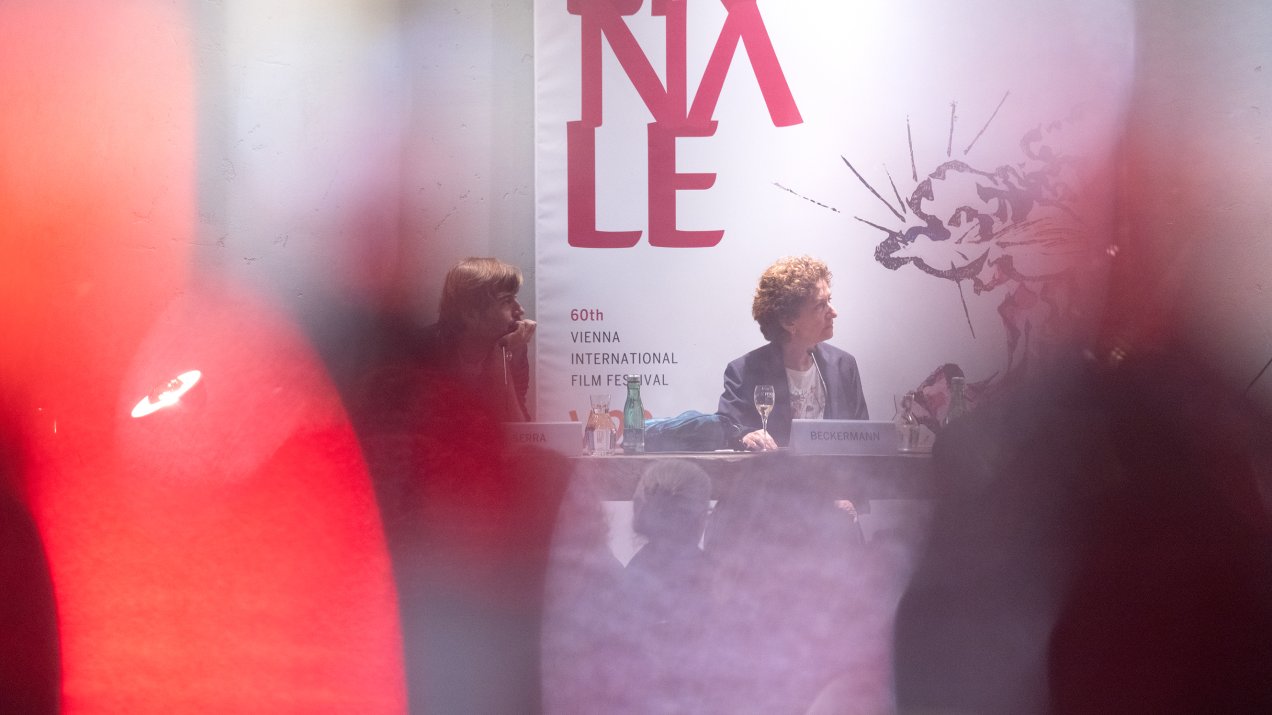 For one thing, of course, film or cinema is always a place to go when you're stuck

FAMILY DINNER
R: Peter Hengl
MO, 24.10. 9 pm: GARTENBAUKINO
TUE, 25.10. 11:15 pm: GARTENBAUKINO
Easter Holidays with the family can turn into quite an unpleasant time as many have experienced first hand. However, in most cases it should turn out to be much more enjoyable than for the Simi, a teenager who struggles with feeling overweight while visiting the remote home of her aunt Claudia and her partner Stefan.
Director Peter Hengl employs all tropes of Austrian horror in his feature debut. Dysfunctional families, strange folk customs, isolation and a forbidding nature seemingly turning against any feeling of peace. Playing with different levels of deformation the film balances on the border between the acceptable peculiarities of everyday life and the ineffable, perverted dread lurking underneath. It’s a film in love with its genre but where does the horror come from? The aunt with her strange mood switches, her son with his paranoia, Peter with his exposed ambiguity or Simi experiencing a difficult relation to her body? The only certainty lies in the relation of the horror to food and all its varieties: its absence, its preparation, its shapes, its smell, its storage and especially everything we don’t know about what lands on our plates. (John Divney)

FOGO-FÁTUO
R: João Pedro Rodrigues
TUE, 25.10. 4:30 pm : URANIA
FR, 28.10. 11 pm: STADTKINO IM KÜNSTLERHAUS
In a fantasy version of Portugal cannily close to the real thing, the boyish, high-cheekboned Prince Alfredo is the only member of the royal family to care about the wildfires ravaging the nation’s forests, even if his interest in their tumescent trees is hardly innocent. With Greta Thunberg’s words on his lips, he decides to volunteer at the local fire brigade, where he meets a whole pin-up calendar’s worth of buff firefighters, including Black sociology student Afonso, with their first lingering handshake the first sign of the libidinous explosions to come. But if royal responsibility is everything, what chance do a prince and a fireman have to grow old together? João Pedro Rodrigues’s self-declared musical fantasy is also his first foray into comedy, which proves to be the perfect complement to his trademark floating eroticism, with snappy one-liners, sight gags and carefully crafted punchlines anchoring the narrative and allowing it to wander in equal measure. And like in all the best comedies, the myriad jokes in WILL-O’-THE-WISP land because they actually mean something. Who knew hilarity would turn out to be the best way to upend colonialist legacies and racist stereotypes? (James Lattimer)

SI MUERO ANTES DE DESPERTAR
R: Carlos Hugo Christensen
TUE, 25.10. 2 pm: METRO, HISTORISCHER SAAL
Though the subject of traumatized childhood can often be made out in Christensen’s work, he never depicted it as violently as in this film, which is based on a short story by William Irish. It takes the form of a classic fairy tale set in the present day: there’s a little girl lost, a courageous boy who comes to the rescue and a sinister boogeyman played by prolific character actor (and occasional director) Homero Cárpena. While EL VAMPIRO NEGRO states very clearly that its child murderer is a deeply tortured man, Cárpena’s lunatic is a true film monster devoid of any human quality, who even goes as far as defying God. Christensen initially intended to present three of William Irish’s tales in one long feature, but the production company decided that the resulting running time would not be ideal for commercial distribution. So they asked him to cut two different films, with SI MUERO ANTES DE DESPERTAR as the first one.

WEST INDIES OU LES NÈGRES MARRONS DE LA LIBERTÉ
R: Med Hondo
TUE, 25.10. 12:30 pm : FILMMUSEUM
WEST INDIES is a visually and aurally stunning musical appropriately set on a giant slave ship symbolizing the trinity of Africa, Europe and the Caribbean. Hondo places the slave ship in an abandoned Citroen factory to highlight the foundational role of the so-called triangular Atlantic slave trade in the advent of the Industrial Revolution, the emergence and rise to power of the bourgeoisie, massive urbanization, the appearance of modernity and the global spread of capitalism, exploring the parallels or even the unbroken historical continuum between the forced migration of the Atlantic slave trade and the more recent migration of Afro-Caribbean subjects to former colonial metropoles. In this explosive demonstration of virtuosity, Med Hondo deftly takes advantage of the staging, framing and montage possibilities of filming in one location and in widescreen format to narrate four centuries of history through genial tracking shots crafted with exquisite and geometrically precise high angles, horizontal and vertical long takes, changes in temporality through camera movement, lush colors and poignant lyrics and choreographies which invite the spectator to join in the struggle to transform the world.

Werner Herzog
Director of
THEATER OF THOUGHT
THE FIRE WITHIN:
A REQUIEM FOR KATIA AND MAURICE KRAFFT

WHAT IS HAPPENING AT THE VIENNALE CLUB TODAY?

Albert Serra with Roger Koza after the screening of PACIFICATION.

In the discomfort zone with Andrea Pallaoro