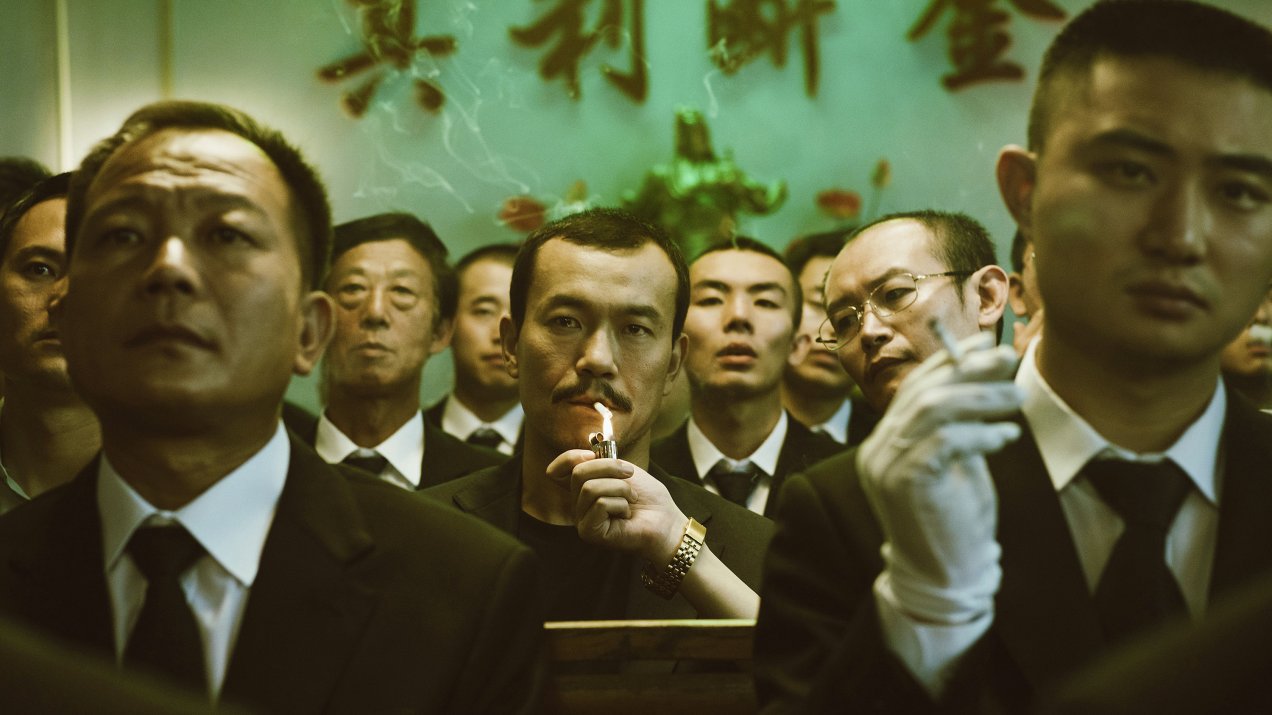 We summarized a small overview with recommendations for the coming days in a blog entry. Tickets are available online, via telephone +43-1-526 594 769 or at our box offices. 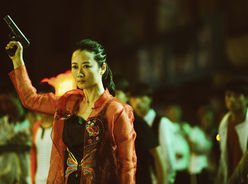 JIANG HU ER NÜ
China/France/Japan 2018, 136 min, OV with German subtitles, D: Jia Zhangke
Cast: Tao Zhao, Fan Liao, Yi’nan Diao
Spanning the 21st century so far, the story follows the low-level criminal Bin and his girlfriend Qiao as, in various cities across China, they are separated by unequal prison sentences, distance and estrangement. As their destinies and fortunes change, their paths uneasily align again. Jia’s latest film is, above all, the study of a complex female character, brilliantly incarnated by Tao Zhao. When we first see her in 2001, Qiao is not a stereotypical “gangster’s moll”: she is mature, resourceful, part of the daily activities of Bin’s criminal mob.
November 3, 8.45 p.m., Gartenbaukino
Tickets and info... 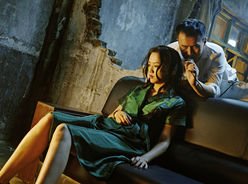 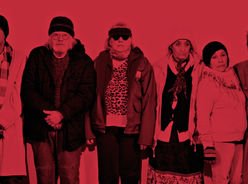 SEGUNDA VEZ (SECOND TIME AROUND)
Belgium/Norway 2018, 94 min, OV with English subtitles, D: Dora García
Cast: Gerardo Naumann, Adriana Barenstein, Graciela Martínez
“My Happening, I now repeat, was nothing other than ’an act of social sadism made explicit.”, writes the Argentinian intellectual Oscar Masotta in 1967. Spanish artist Dora García, employing different means of expression from re-staging and cinema to an enriching website with great texts accompanying the film, asks what the happenings of the mythical Lacanian of pre-dictatorship Argentinia can mean today. Even more she comes close to the ideal of fictional figure Pierre Menard from José Luis Borges’ story about a man who immersed himself in re-writing Don Quixote to the point of a deliberate anachronism. Due to an aesthetic of disorderly interruption and the constant pointing-out of the partly discomforting presence of the camera we never feel safe.
In the presence of Dora García.
November 3, 3.30 p.m., Stadtkino im Künstlerhaus
Tickets and info... 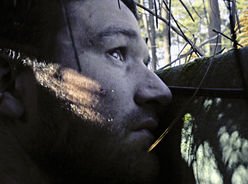 LES PROIES (THE GAME)
France 2018, 53 min, OV with English subtitles, D: Marine de Contes
A very meticulous process that includes pigeons, boxes, wires and huts is being put together by a group of men (and one woman) in the middle of a French forest. We don’t know exactly what they do but it looks like they are getting ready for some kind of war. And, in some ways, that is exactly what goes on here. These people are patiently hunting pigeons through very elaborate contraptions, waiting for the exact moment to attack them. But their war is not really against the birds. Their enemy is deforestation, the way the trees are disappearing, turning their traditional “game” obsolete, maybe even ruining their purpose in life.
In the presence of Marine de Contes.
November 3, 6 p.m., Stadtkino im Künstlerhaus
Tickets and info... 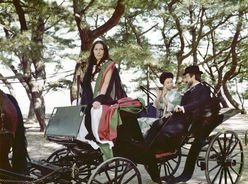 A ILHA DOS AMORES (THE ISLAND OF LOVE)
Portugal/Japan 1982, 169 min, OV with English subtitles, D: Paulo Rocha
Cast: Luís Miguel Cintra, Yoshiko Mita, Clara Joana
Series: NEWS FROM THE ARCHIVE
A major figure of Portuguese cinema, Paulo Rocha started to work in the early 1970’s on a project on the life of Wenceslau de Morães (1854-1929), a Portuguese writer and former Navy officer who settled in Japan in the late 19th century. Disappointed with the politicalsituation of its time, Morães, a secret man of unstable temperament and absorbed by his own demons, would never return from the Far East until his death. The Carnation Revolution in 1974 and its own political convulsions forced Rocha to change the project and a year later he also leaves for Japan. He did no more in the years to come than to prepare, write, rewrite, and modify this complex and immense film-fleuve, finally shot between Lisbon and Tokyo from 1978 to 1981. It’s a fusion film, a clash of two worlds and two cultures (West and East). The “Nine Songs” collection of poems by the Chinese Qu Yuan organize the chapters.
November 3, 9 p.m., Metro, Historischer Saal
Tickets and info... 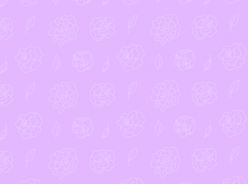 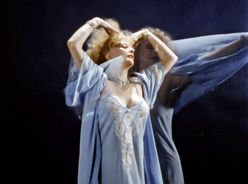 STANDARD
Argentina 1989, 81 min, no dialogue, D: Jorge Acha
Cast: Libertad Leblanc, Jorge Diez, Miguel Oliveira
In Focus: Jorge Acha
After Juan Perón’s death in 1974, José López Rega, the sinister Minister of Social Well-Being planned a mausoleum that would be named Altar de la Patria [Homeland Altar], where all the transcendental and popular signs built in the collective imagination of the nation would be celebrated offering a haggard metaphysics in which the essence of what it is Argentinean would shine forever.Acha deconstructs this wish by contrasting the strength of the workers’ eagerness in tension to a reactionary codification of it. The workers are sometimes seen as ants destined to anonymously build the greatness of this nation. But they also get distracted and therefore forget their architectonical mission. Indeed, workers prefer to play cards, to fight among each other, or to jerk off. The intuition of the filmmaker lies on suspecting that Argentina is an impossible country and its presumed greatness always ends in debris, or in an organic nation with no mercy for dissent.
November 4, 4 p.m., Urania
Tickets and info... 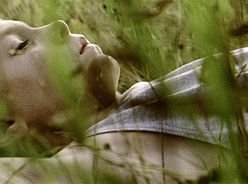 LOW TIDE
USA/Belgium/Italy 2012, 92 min, OV, D: Roberto Minervini
Cast: Daniel Blanchard, Melissa McKinney, Vernon Wilbanks
In Focus: Roberto Minervini
The reason there is little dialog in LOW TIDE is not only due to its setting. In the small communities around Houston, people obviously don’t talk much, and the young boy who lives with his single mom has even less to say. His life consists of taking care of his mother when she has had too much to drink the night before and can’t make it to her low-paying job at the hospital.Roberto Minervini focuses solely on the everyday life of the boy, who remains nameless throughout the film, observing him as he performs household chores in his surroundings: a nearby trailer park, a pond that serves as a place of refuge, and a slaughterhouse. In the process, Minervini makes us aware of the boy’s exceptional inner turmoil, concealed by routine and boredom. A drastic act at the end pulls us out of that reality.
November 4, 4 p.m., Filmmuseum
Tickets and info... 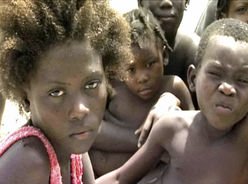 VISUAL JUSTICE PROGRAMM 6:
LE PROFIT ET RIEN D’AUTRE ! – OU RÉFLEXIONS ABUSIVES SUR LA LUTTE DES CLASSES (PROFIT AND NOTHING BUT! OR IMPOLITE THOUGHTS ON THE CLASS STRUGGLE)
France/Belgium 2001 2001, 52 min, OV with English subtitles, D: Raoul Peck
OBZORNIK 63 – VLAK SENC (NEWSREEL 63 – THE TRAIN OF SHADOWS)
Slovenia 2017, 38 min, OV with English subtitles, D: Nika Autor
Two essays unveil their context by addressing the fate reserved for the most deprived. Broadcast as part of a TV series called LA BOURSE ET LA VIE, the film by Raoul Peck strives to provide a few tools that will help understand and get a perspective on the mechanisms and effects of globalization at the turn of the millennium, eleven years after the fall of the Berlin wall. This reflection starts in a precisely defined here and now: Haiti, that is, “a country that doesn’t exist”, as the narrator keeps repeating like a melancholic Aoidos. Actually, Haiti does not exist economically other than as a neglected symptom of the ongoing catastrophe that globalization represents for peoples of the Third World. Building on the question asked by Raoul Peck, “What has cinema been able to do in this history?”, Nika Autor puts the entire history of cinema at the service of comprehending and valuing both shots, filmed by two economic migrants who have found refuge under a train car who, unlike Rilke’s flowers, resist “along the tracks, shuddering as the train roars by.”
November 4, 5 p.m., Metro, Historischer Saal
Tickets and info... 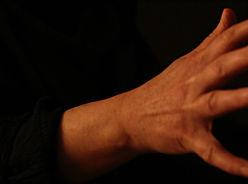 CHAOS
Austria/Syria/Lebanon/Qatar 2018, 95 min, OV with German subtitles, D: Sara Fattahi
Cast: Raja, Heba, Jaschka Lämmert
TRAUMA has its own implacable logic. In Sara Fattahi’s second feature, which unites the stories of three Syrian women physically separated by distance, one woman says, “Everyone knew that for a period of time the sun wouldn’t come out, because everyone was going to die.” This forceful statement expresses the desire to overcome nature’s profound indifference, to make it one with the sufferer. Fattahi’s film captures trauma’s eternal return: A woman locks herself up in her apartment in Damascus, another takes her haunted memories of family and war with her to Sweden and channels them into her art, yet another walks the streets and an art museum in Vienna.
In the presence of Sara Fattahi and members of the team.
November 5, 6 p.m., Gartenbaukino
Tickets and info... 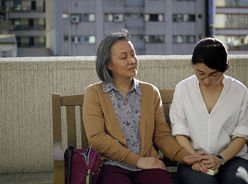 ZI YOU XING (A FAMILY TOUR)
Taiwan/Hong Kong/Singapore/Malaysia 2018, 107 min, OV with English subtitles, D: Ying Liang
Cast: Gong Zhe, Nai An, Pete Teo
Several years ago, Ying Liang, a director from the People Republic of China, fell afoul with the authorities over one of his works and left for Hong Kong, which might be a part of the nation proper but is still (until 2047) a Special Administrative Region and thus like another country. His latest: ZI YOU XING, shows a female (!) PRC filmmaker called Yang Shu whose career trajectory cum œuvre are most similar to his, including a true crime-exposé just like his own WO HAI YOU HUA YAO SHOU (2013). Yang gets invited to screen this work at a festival in Taiwan, which means monumental visa hassles. Yet she’s willing to go through all that as this offers the opportunity to meet up with her mother who lives on the mainland. Yang’s Hong Kong- born and raised husband gets her onto a Taiwan tour the couple will only trail – all that so as to not alert authorities unduly. The reunion proves to be a quietly heart-breaking affair, while the festival experience makes it clear how different liberty and a common sense of security feel in the PRC, Hong Kong and Taiwan ...
November 3, 1 p.m., Stadtkino im Künstlerhaus
November 5, 6.30 p.m., Urania
Tickets and info... 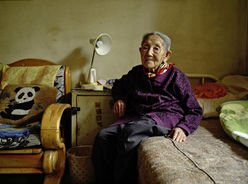 SI LINGHUN (DEAD SOULS)
Part 1, 248 min, OV with English subtitles
Part 2, 248 min, OV with English subtitles
France/Switzerland 2018, D: Wang Bing
For over two decades Wang Bing has chronicled China’s tumultuous history, traumatic memory and neglected populations. In his latest epic documentary, DEAD SOULS, filmed between 2005 and 2017, he speaks to a few nonagenarians – selected from originally over one hundred interviewees – who were sent during the Cultural Revolution for “re-education” in the Jiabiangou labor camp, where many workers died from hunger. Adhering to a straightforward interview format, familiar from his previous films, Wang Bing’s intensely focused film captures the historical moment and its aftermath in its full psychological complexity: Some survivors, humiliated and heartbroken, tell grim tales tinged by fatalism; others prove resilient, defiant against their accusers who were often driven by self-interest. The polyphonic record at times falls to a whisper, due to the interviewees’ fragility, but the portrait of inequities and horrors is nothing if not searing.
PART 1: November 5, 11 a.m., Metro, Historischer Saal Tickets and info...
PART 2:  November 6, 11 a.m., Metro, Historischer Saal Tickets and info... 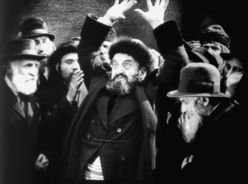 DER FLUCH
Austria 1925, 71 min, no dialogue (German intertitles), D: Robert Land
Cast: Oskar Beregi, Lilian Harvey, Albert Heine
Special Programs: Surviving Images
This film takes us on a journey into a Galician shtetl of the 19th century, recounting in a parable-like manner the fate of the horse trader Jehuda Nachmann and his catharsis after he strays from the straight and narrow. Nachmann does not take the Jewish commandments very seriously and thus earns the scorn of the father of a woman who took her own life because of his misconduct. He is cursed, and neither the passing of time nor new surroundings can stop the misfortune befalling him and his descendants ...
Music: Katharina Ernst
November 5, 4.30 p.m., Metro, Historischer Saal
Tickets and info...