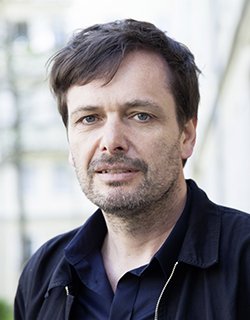 Born 1969 in Marburg, Germany, is a German film director. He grew up in Zaire, where his parents worked as development workers. Köhler studied art in Quimper, France (1989-1991) and then philosophy and visual communication at the Hochschule für bildende Künste Hamburg. After his studies he made several short films, his first feature film BUNGALOW was shown in 2002 at the Panorama of the Berlin International Film Festival. His feature film SCHLAFKRANKHEIT was awarded the Silver Bear (Best Director) in 2011. His films are assigned to the "Berlin School".
Films (selection): FELDSTRASSE (1993, short), STARSKY (1997, short), RAKETE (1999, short), BUNGALOW (2002), MONTAG KOMMEN DIE FENSTER (2006), SCHLAFKRANKHEIT (2011), IN MY ROOM (2018)