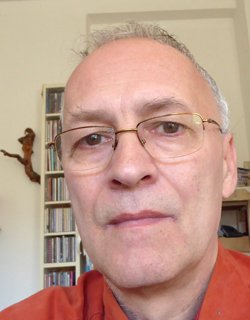 Born 1958 in Nürnberg, Germany, is a German painter, artist and filmmaker. He studied at the Kunstakademie Düsseldorf and finished the Academy time in 1985 as a master student. As a result, he created his first films, staged performances, composed music and was among others Member of AGZ ("Anarchist padded cell"). Numerous international exhibitions, awards and scholarships. He lives and works in Düsseldorf.
Films (selection): NACH DEM KRIEG FUHR JOHNNY NACH WIEN (1983), VANESSA OF THE CAVE (2008) and ROM CHINALAND TO RICARDO (2012).