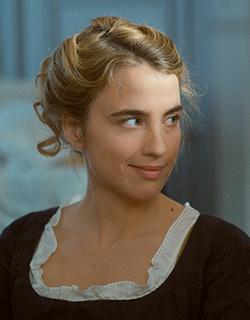 Adèle Haenel, born 1989 in Paris, is a French actress. She attended theater classes in Montreuil and at the age of 13 took the lead role in LES DIABLES. She became known in 2007 for her role as Floriane in the film WATER LILIES, the debut film by director Céline Sciamma, for which she was nominated in 2008 for the César for best young actress. In 2009 she was awarded the actor prize at the Cinéma tous écrans de Genève festival for the role of Lucie in the movie DECHAINÉES. In 2012, she was named the French "Shooting Star" by the European Film Promotion and received another César nomination for her portrayal of a young prostitute in Bertrand Bonello's film L'APOLLONIDE (SOUVENIRS DE LA MAISON CLOSE). In 2014 she won a César as Best Supporting Actress for her role in the movie SUZANNE, and the following year a César for Best Actress for LES COMBATTANTS.