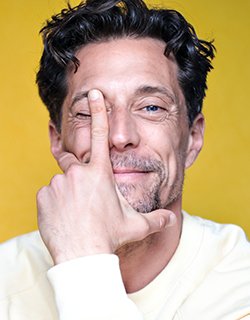 As an actor in feature films, he is known from "James Bond - Skyfall", "The Voices", "The Scary House", "The Best of All Worlds", among others. For the last two he was nominated for the Austrian Film Award. On TV he also had a lot of exciting appearances: E.g. he played the main role in the ARD - feature film "Now or Never", turns in the main cast of Daniel Prochaska's "Tatort - Unten" and most recently in the main cast of the hit series "Glauben" and "Die Macht der Kränkung 3" (also directed by Daniel Prochaska). As a singer and musician, he has composed and performed "Fia Di," the theme song from "Die beste aller Welten," among others. Pink also voices computer games, documentaries, radio plays, and "Buddy Thunderstruck" in the Netflix animated series of the same name.