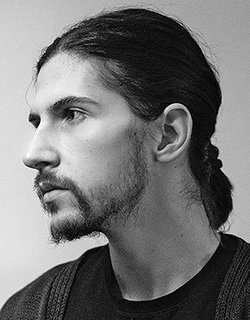 Born 1989 in Belgrade, Serbia, is a cinematographer and director. He graduated from the Faculty of Drama Arts in Belgrade (cinematography studies) and completed the Master studies of Art and Media at the University of Arts Berlin in 2019. For his film and photography work, he won the “Erste Bank foundation” Award for Best Visual Artist in 2014. He worked as a cinematographer on several feature films including YOU HAVE THE NIGHT by Ivan Salatić and ICH WAR ZUHAUSE, ABER by Angela Schanelec. The short film WHITE BIRD, which he worked on as a cinematographer and co-director with Linfeng Wu, had its premiere on Berlinale Shorts 2016. Ivan Marković lives and works between Belgrade and Berlin.
Films (selection): WHITE BIRD (2016, short), SVI SEVERNI GRADOVI (2016, as cinematographer), CENTAR (2018), CHUN NUAN HUA KAI (2019)