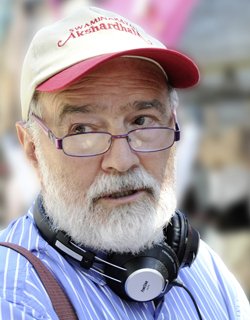 Born in 1947 in Madrid. He made his first film, MANUELA, in 1976, and he is a filmmaker especially relevant within the Transición. Since 1982, “abandoned by cinema,” as he claims, the adventurer and gambler Gonzalo García Pelayo has been dedicating himself to music production, the organization of bullfights, and, finally, along with his brothers, to systematic gambling. His relationship with gambling has been subject for the feature film LOS PELAYOS. It wasn’t until this year that Pelayo returned to cinema after more than 30 years to create a new work, ALEGRÍAS DE CÁDIZ.
Films: MANUELA (1976), VIVIR EN SEVILLA (1978), FRENTE AL MAR (1978), CORRIDAS DE ALEGRÍA (1982), ROCÍO Y JOSÉ (1982), ALEGRÍAS DE CÁDIZ (2013)