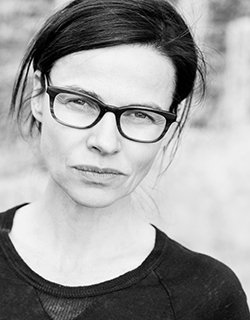 Born 1962 in Aalen, Germany, is a German film director and screenwriter. She studied acting at the Hochschule für Darstellende Kunst in Frankfurt am Main from 1982 to 1984. Until 1991 she played at the theater and received engagements at Schauspiel Köln, Thalia Theater Hamburg and Schauspielhaus Bochum. From 1990 to 1995 she studied film directing at the German Film and Television Academy in Berlin and has been working as a freelance film director ever since. During her studies she met Christian Petzold and Thomas Arslan, with whom she comprised the so-called first wave of the Berlin School. Her films have been awarded numerous prizes: MARSEILLE received the "Award of the Best Screenplay" from the German film critics, her feature film ORLY won the Film Art Award of the Festival of German Films in Ludwigshafen. Her latest film ICH WAR ZUHAUSE, ABER was nominated for the Golden Bear and won the directing prize at this year's Berlinale. Angela Schanelec teaches as professor for narrative film at the Hochschule für bildende Künste Hamburg.
Films (selection): BEAUTIFUL YELLOW COLOR (1991), I STAYED IN BERLIN DURING THE SUMMER (1994), THE HAPPINESS OF MY SISTER (1995), PLACES IN CITIES (1998), MARSEILLE (2004), GERMANY 09 - FIRST DAY (2009), ORLY (2010), PONTS DE SARAJEVO (2014), THE DREAMY WAY (2016)