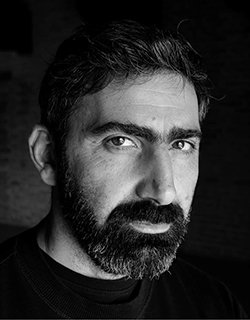 Yuri Ancarani, born 1972 in Ravenna, is an Italian video artist and film maker. His works come from a continuous mingling of documentary cinema and contemporary art and are the result of a research aimed to explore regions which are not very visibile in the daily life. His works have been shown at national and international museums and exhibitions, like the Fondazione Sandretto or the Guggenheim Museum in New York and several film festivals as the Venice Film Festival.
His works include (selection): IL CAPO (2010), PIATTAFORMA LUNA (2011), DA VINCI (2012), SAN SIRO (2014), SÉANCE (2014).