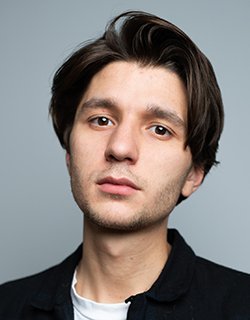 Vladimir Nadein is a producer, curator and actor born in Moscow, Russia in 1993. He is a co-curator of the Russian Pavilion at the Venice Architecture Biennale 2021. In 2016, he co-founded Moscow International Experimental Film Festival and functioned as the director for five consecutive editions, until 2020. He was a co-curator of Extracurricular Practices, part of the educational program at the VII Moscow International Biennale for Young Art. He has curated film programmes for the Garage Museum of Contemporary Art, Lumiere Brothers Gallery and Photography Center, the UCLA University of California, Hamburg International Short Film Festival, the Moscow Jewish Film Festival, Panorama and other venues. Since 2021 Vladimir has been teaching film production at the Moscow School of New Cinema. Vladimir graduated from the acting department of the Moscow Art Theater School in 2013.