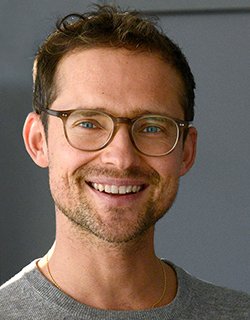 Silvan Zürcher (* 1982 in Aarberg, Switzerland) studied Philosophy, Film Studies and German at the Universities of Bern and Zurich from 2002 to 2008. Along the way he worked as a projectionist in an art house cinema in Bern. From 2009 to 2014 he studied film production at the German Film and Television Academy Berlin (DFFB). During his studies he produced short and medium-length films. In addition, he worked as an assistant director and developed his own material for feature films. His first feature film DAS MERKWÜRDIGE KÄTZCHEN premiered in 2013 at the Forum of the Berlinale and was subsequently celebrated at numerous international festivals and won many awards. In 2017, he founded the production company Zürcher Film together with his brother Ramon Zürcher, with whom they co-produced their second feature film DAS MÄDCHEN UND DIE SPINNE. The film had its world premiere in the Encounters international competition at the Berlinale in 2021 and won the Best Director Award and the FIPRESCI Prize.