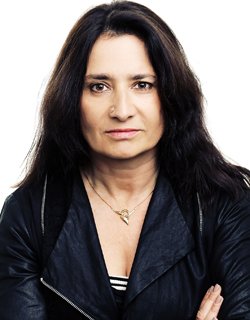 Sabine Derflinger, born in Upper Austria, studied at the Film Academy Vienna, emphasizing on “Cinematographic narration between epic and dramatic art” (final thesis). Subsequently she has produced various award-winning feature films and documentaries (e.g. 42plus, Day and Night). In 2010, Sabine Derflinger founded her own production company, Derflinger Film, producing independent films and documentaries, in addition to promoting international cooperation (e.g. „Those who can tell no tales“ (directed by: Jasmila Zbanic), „Em Familia“ – Globo TV). In 2011, she became the first woman ever to direct an episode of the well known German/Austrian crime series Tatort, receiving the „Grimme“ Award 2014, for the episode „Down for the Count“. 2015/2016 Sabine Derflinger set up and directed the new TV-series „Vorstadtweiber“ („Suburbia – Women on the Edge“), which has become the most successful Austrian TV-series of the past ten years receiving the „Metropolis“ Award 2016, best directed TV-series for „Suburbia – Women on the Edge“ Season 2 Episode 6.