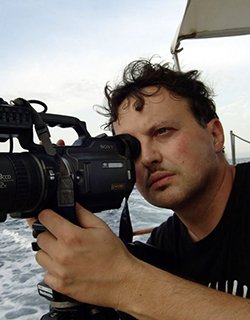 Photographer, filmmaker. Graduated in Architecture and graduated from the Experimental Cinematography Center. After working as a photojournalist and stage photographer, from 1997 he devoted himself to directing documentary films. He has received prizes and awards in national and international festivals. He carries out didactic and audiovisual training activities, collaborates with the DAMS of the University of Salento and with the Gian Maria Volontè Film Art School in Rome. He designed RadioUèb, the radio in a nutshell, at the Day Center in via Montesanto in Rome. He is the creator and artistic director of Cinema del Reale, a festival of authors and audiovisual works that takes place every year in Salento.