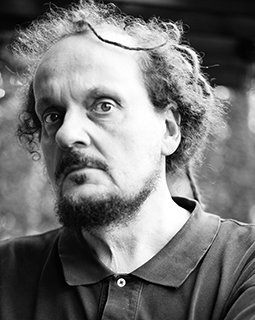 The filmmaker and professor of animation at the Lodz Film School in Poland has been creating animated auteur cinema for over twenty years as a self-taught artist. Retrospectives of his work have been presented at venues including MoMA in New York, the National Museum of Brazil, Tokyo International Forum and the National Museum in Warsaw. His animations have also screened at the National Gallery in London and in Berlinale Shorts. He has co-created live animation performances with symphony orchestras around the world. He worked on ZABIJ TO WYJEDZ Z TEGO MIASTA for eleven years.