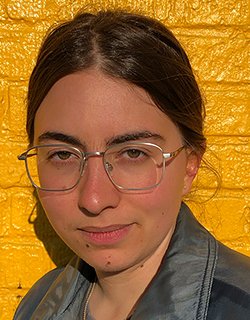 Luiza Gonçalves, born in Buenos Aires (1997) is an artist and filmmaker based in Brooklyn, New York.

Her interest in documentation, digital manipulation, and figure drawing led her to Pratt Institute where she earned her Bachelor of Arts in Film and Video. In 2016, her documentary short, NEW CITY DOC was featured at the Nyack Film Festival in New York.

In 2020, Gonçalves enrolled in the masters program at Elias Querejeta Zine Eskola where she filmed UN BANANERO NO ES CASUALIDAD, her latest award-winning film prized at the 57th Pesaro International Film Festival. She is currently developing her first feature length film.