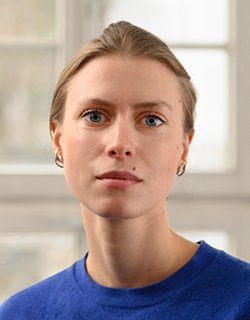 Luise Hauschild was born and raised in Leipzig. In 2015 she started working in the film industry in Paris, which was followed by her studies in film
production at the German Film- and Television Academy Berlin, where she produced many successful short films, like the German Short Film Award Nominee EVERYTHING ALRIGHT. In 2020 she started the production company New
Matter Films together with Mariam Shatberashvili.

Their first film WHAT DO WE DO WHEN WE LOOK AT THE SKY? by Alexandre Koberdize premiered in the Berlinale Competition 2021, won the FIPRESCI award and is nominated for the European Film Award. Apart from that New Matter Films she has plenty more films in postproduction and development such as TALKING ABOUT THE WEATHER by Annika Pinske.