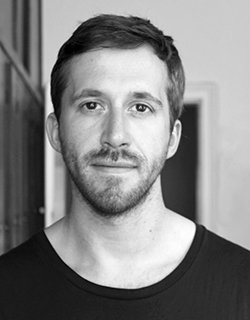 During his studies at the Filmakademie Ludwigsburg, Levin Peter, born in 1985 in Jena / Germany, realized several documentary films that were shown worldwide. His diploma film HINTER DEM SCHNEESTURM won the First Steps Award and was presented as a guest of the Berlinale Perspektive. He was part of the jury of the Visions du Réel and received the Nipkow and the Gerd Ruge scholarship. In 2016, together with Elsa Kremser, he founded the RAUMZEITFILM production in Vienna. As director duo they are currently working on their first feature film DER GRÜNE WELLENSITTICH, which received the Berlinale Kompagnon Screenplay Award.
Films: SPACE DOGS (2019, A/D), HINTER DEM SCHNEESTURM (2016, D), FOR WHOM I MIGHT DIE (2016, D/A), EIN VERSPRECHEN (2012, D), SONOR (2010, D), PRESTES MAIA (2008, D)