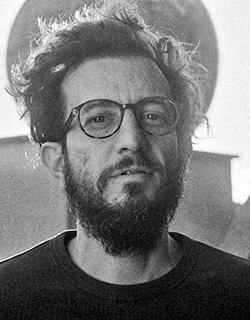 Leandro Listorti (1976, Buenos Aires). Film director, programmer and projectionist born in Argentina. Since 2015 he has been in charge of the Technical Coordination of the Buenos Aires Film Museum. He made a series of short films in Super 8 exhibited at international festivals such as Edinburgh Film Festival, Anthology Film Archive and Ann Arbor.

His first feature "Death Youth" (2010) premiered at IDFA and was part of Viennale and Doclisboa, among others. From 2005 to 2015 he was programmer at the Buenos Aires Int'l Independent Film Festival (BAFICI). In 2014 he made the short film "100mts." as part of the collective film "Intervened Events" based on archival footage from the newsreels “Sucesos argentinos”. In 2018 he premiered "The Endless Film" at IFFR Rotterdam and he was an artist-in-residence at the Living Archive (Arsenal Berlin). One year later he participated in the Caring for Artists' Films Workshop, organized by MoMA. During 2017, together with Paula Zyngierman, he founded the production company MaravillaCine. His second feature film "Herbaria" (2022) premieres in the Burning Lights Competition at Visions Du Réel Int'l Documentary Film Festival Nyon.