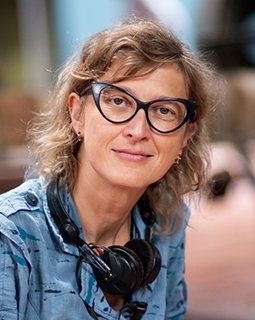 Born in Sarajevo in former Yugoslavia in 1974, she studied theatre and film directing at the city’s Academy of Performing Arts. Before she began making films, she worked as a puppeteer in Vermont, USA and as a clown. Her feature film debut, GRBAVICA, won the Golden Bear in 2006 and went on to receive numerous other awards. Her second film, ON THE PATH , also premiered in Competition at the Berlinale. Her films are all produced by Deblokada, the artists’ association she founded. In 2014, she won the Kairos Prize in recognition of the major cultural and social impact of her work.
Movie (selection): GRBAVICA (2006), ON THE PATH (2010), FOR THOSE WHO CAN TELL NO TALES (2012), LOVE ISLAND (2014), ONE DAY IN SARAJEVO (2015)