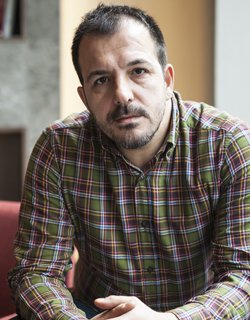 Born in 1973 in Turkey. He graduated from the Department of Cinema under the Faculty of Fine Arts of Dokuz Eylül University. His short documentaries, FAZLAMESAI (2012) and THE BURNING MOUNTAIN (2014) have been screened at more than twenty international film festivals including Visions du Réel Nyon and DOK Leipzig. Keltek's first feature film METEORLAR (2017) had its world premiere at the film Festival of Locarno and won the Cinelab Award. The film blends together elements of documentary and fiction, and is a reaction to the political situation in the Kurdish region in Anatolia.
Films (selection): FAZLAMESAI (2011, K), KOLONI (2015), METEORLAR (2017), GULYABANI (2018, K)