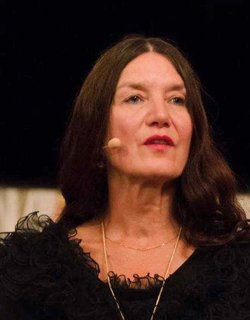 Elisabeth von Samsonow started teaching philosophy at the University in Munich in 1995 while she was a student in the studios of Eduardo Paolozzi and Daniel Spoerri who had held chairs at the Munich art academy that time. She won the upcoming artist prize of the State of Upper Bavaria in 1986. Since 1996 she holds the chair of philosophy and art anthropology at the Academy of Fine Arts Vienna. Her recent works comprise installations, videos and performances arranged around her sculptures, as „Xylo Twittering“ (Berlin 2013), „The Nervous System of the Earth“ (Vienna 2014), Living Currency (Thessaloniki 2014), „Horse’s Glory“ (ART BOX, MQ Vienna 2015), „DISLIKE MYSELF TERROR ACT/ WANT MYSELF BEAUTIFUL DESIRE SCULPT“ (MAK Vienna 2016) and „LES BALLETS RUSSES PRESENT THE ANTI ELECTRA OF ELISABETH VON SAMSONOW“ (Solyanka State Gallery Moscow 2017). Her video work „LABORATORY OF THE EXO/ ENDO CORPUS“ was screened at the THE PHOTOPHORE festival at Athens and at the ZKM in Karlsruhe (2017).