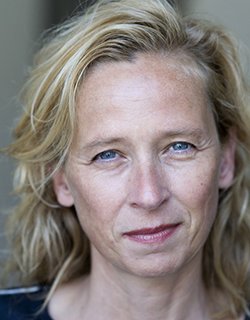 Claudia Müller, born in 1964, is a German documentary filmmaker living in Berlin. She is known for her numerous outstanding film portraits, which are primarily dedicated to international artists. Müller has a profound knowledge of the production and theory of contemporary art and a deep insight into the art scene; in almost three decades she has established connections with many artist:ins all over the world. After studying German, journalism and art at the universities of Berlin and Cologne, she worked as a freelance journalist and director and made numerous documentary films. Claudia Müller is particularly interested in the visual arts and presents in her films the work of artist:s such as Jenny Holzer (2009), Shirin Neshat (2010), Kiki Smith (2014), VALIE EXPORT (2015), Katharina Grosse (2020) as well as the writer and theater director Hans Neuenfels (2011) and the designer and artist Helmut Lang (2016). In her ongoing documentary series "Women Artists," Claudia Müller has featured Katharina Grosse, Annette Messager, Berlinde de Bruyckere, Monica Bonvicini, Tatiana Trouvé, and Ursula von Rydingsvard. More than 80 women artists from diverse geographical and cultural contexts are represented in this comprehensive project. Their work contributes to the ongoing debate on identity, gender, sexuality, feminism, female aesthetics, and the visibility of women in art.