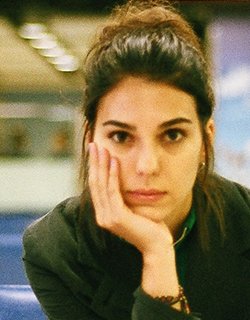 Carolina Diez-Cascon (Barcelona, 1985) is a designer and art director who works in the fields of contemporary art, fashion and film. As a designer, she runs her own label, Echo 77, and has been part, among others, of the teams of Jean Paul Gaultier in Paris and Jeremy Scott in LA. Since 2015 she is the art director of contemporary art fair Swab Barcelona where she also curates the special programs On Paper, which explores the wide possibilities of the material, and Focus, with topics as video art from South East Asia and Emerging Talent from Eastern Europe.

In film, she has worked as a VJ for clubs as Apolo or Razzmatazz, has created several video installations and fashion films and has been the production designer of the feature film MBAH JHIWO (Ancient Soul) premiered in 2021's Berlinale Film Festival.