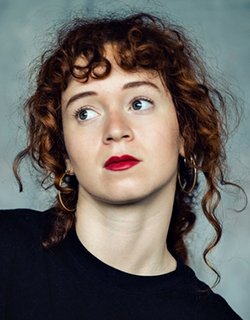 Born in Paris to a psychiatrist father and a psychologist mother at the DDASS in Cergy Pontoise, Clara grew up in Paris. After a literary baccalaureate, in 2018 she joined the X class of the National Theater School of Brittany, directed by Arthur Nauzyciel and Laurent Poitrenaux. For three years, she met and worked with artists who fundamentally changed her relationship to work and the world. At the beginning of 2021, in parallel with her third year, she auditioned for five months with Valeria Bruni Tedeschi for her film Les Amandiers, about the school founded by Patrice Chéreau in Nanterre in 1986. The film, in which she plays the role of Eva Ionesco, is presented in May 2022 in official competition at the Cannes Film Festival. In parallel, Clara plays for Pascal Rambert (Dreamers) and Mohamed El Khatib whose play Mes Parents opened the Festival d'Automne in September 2022 at the Théâtre de la Ville. Next March, she will be on the stage of the Odeon theater, for Tiphaine Raffier's next creation, Nemesis.