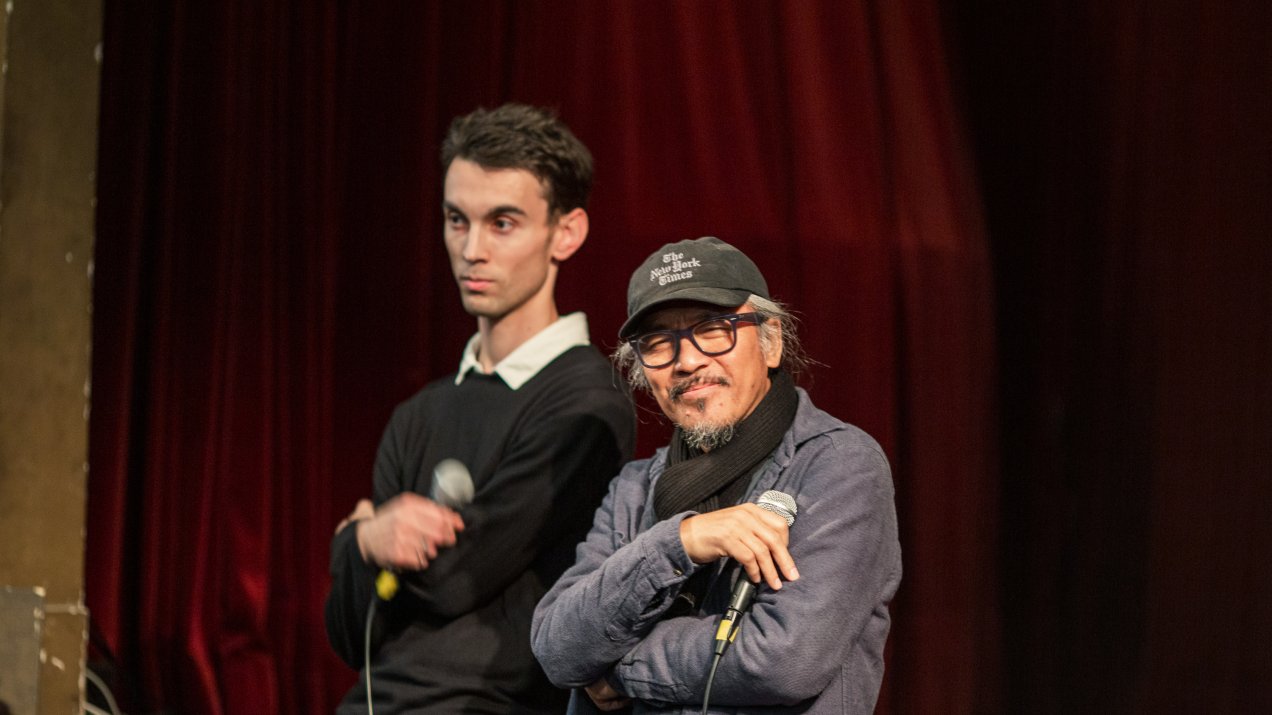 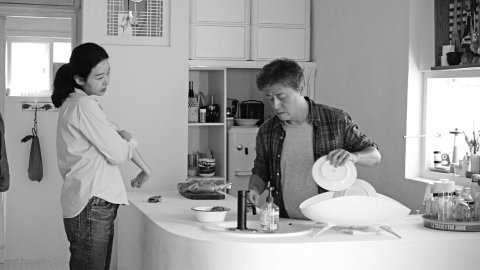 WALK UP
R: Hong Sangsoo
MON, 31.10. 1.00 pm: GARTENBAUKINO
DI, 01.11. 9.00 pm: METRO, HISTORISCHER SAAL
In American English, you can use the word “story” with two completely different, meanings. A “story” can be the floor in a building and it can also be, well, a story. In WALK UP, both meanings curiously combine and connect, a probably unintentional layer of interpretation in a movie that’s full of them. This is a film about a director who goes with his daughter to visit an old friend, an interior designer, to ask her for advice about the profession, since the young woman wants to become a designer just like her. That’s the entrance to this three-story building in which four stories are actually being told, since you have to consider the ground floor too. During the course of an unspecified amount of time (it could be weeks, months, even years), the filmmaker will meet different women and, over the course of a few meals and a lot of wine and soju, a whole life may have passed. Or probably not.
Hong Sangsoo creates another apparently simple but extremely complex puzzle of relationships (between a father and his daughter, a man and a few women) in different stages of life. A game that explores desires, dreams, regrets and, of course, cinema. Life as a three-story story. (Diego Lerer) 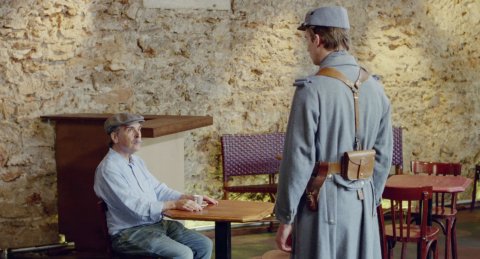 LE MUR DES MORTS
R: Eugène Green
MON, 31.10. 11.00 am: URANIA
“There be three times; a present of things past, a present of things present, and a present of things future.” writes Saint Agustin in his Confessions, a quote that opens Eugène Green’s LE MUR DES MORTS. He gives each time a name: memory, sight and expectation. Arnaud, a young man disconnected from the present (and thus all three of them), wanders around Paris in August. The most lethargic month of the year is detrimental to any troubled soul. He soon finds himself in front of a wall outside the Père Lachaise cemetery where the name of all the Parisian soldiers lost in the Great War can be found. As he reads, another young man materializes, although perhaps only to his eyes. He is dressed in a soldier’s uniform and was born a hundred years before his time.
A portal between the three times opens up softly, something only films can achieve, as memory becomes an image that can be perceived by sight, with this sight turning darkness into an expectation of things to come. Pierre sends Arnaud to seek for the suffering and the light of those who are long gone. He finds it in serene, beautiful conversations that will slowly bring him and everyone around him to truly experience their times. (Lucía Salas)
With 45TH PARALLEL. 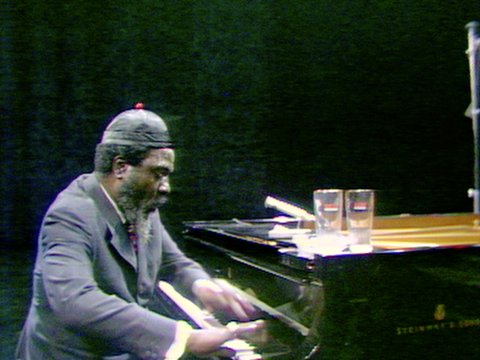 REWIND AND PLAY
R: Alain Gomis
MON, 31.10. 1.00 am: STADTKINO IM KÜNSTLERHAUS
Put together and rearranged from footage recovered from Thelonious Monk’s 1969 French tour, this fascinating documentary places a specific focus on an interview/concert the extraordinary jazz pianist gave to a local TV show. The film begins with the arrival of Monk and his wife in Paris, where he is welcomed like a celebrity. Soon we see him recording the show. Gomis doesn’t show us the program as it finally aired, but rather what happened behind the scenes during the shooting. And what took place there is striking, surprising and quite unpleasant. Monk was already somewhat ill, and his experience there was catastrophic, with a presenter and producers forcing him to answer the same questions over and over or interrupting his answers mid-sentence. Treated as if he were a puppet, a curiosity or an object of consumption, the visibly fragile and heavily perspiring pianist suffers through the experience in a visible way, but nobody stops the circus to ask how he actually feels. In the few moments he is allowed to play the piano, Monk seems to find some sort of inner peace and is able to express himself as he wants to. The best way he knows how to fight racism and oppression is through his art. (Diego Lerer) 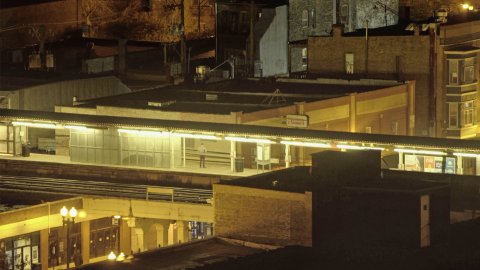 FOOTNOTE
R: YANG Zhengfan
MO, 31.10. 4.00 pm: METRO, HISTORISCHER SAAL
DI, 01.11. 20.45 pm: FILMMUSEUM
Seen through a window, all cities can look peaceful. It all depends on location and orientation. Like many filmmakers suddenly trapped in isolation, Zhengfan Yang shot the outside of a neighborhood in Chicago from above, trying to look for traces of what had once been a world and had now become a series of fragments. The images move slowly through the seasons in this small circuit, and the sound does too, but the source we hear can be anywhere at any time: a police scanner recorded during the last year of the Trump administration and the first of the pandemic.

FOOTNOTE tunes into police language in its most literal sense: how people, places and actions are described and how tasks are assigned. Ghosts of the recent past haunt this film (the killing of Gorge Floyd is the first and foremost) while it observes a state apparatus as a phenomenon belonging to a city, to a system, and, as time moves forward, to a country. (Lucía Salas) 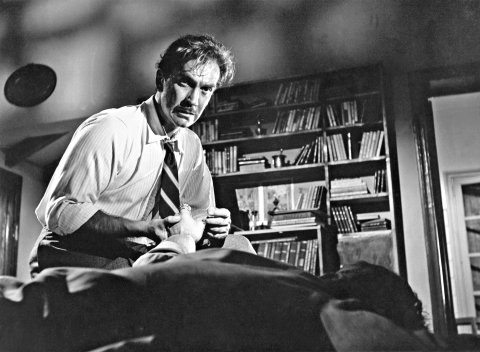 LOS TALLOS AMARGOS
R: Fernando Ayala
MON, 31.10. 1.00 pm: FILMMUSEUM
Two men take a train in the night. One of them begins to reflect about the duo’s recent past, his own very personal dreams, doubts and failures and the circumstances that have linked him to the other man. The tale is subjective and fragmentary, includes a terrible murder and is challenged in the second half once a different point of view on the same events is added. The result is a film that constructs these two main characters as well as a deep sense of futility and despair. This is probably the Argentine film that captures noir motifs and style in their purest form. It was Ayala’s second feature and its cinematography (by Chilean master Ricardo Younis) has been named as one of the 100 best in film history by American Cinematographer magazine. The score was composed by famous Argentine musician Astor Piazzolla and is of particular importance because it includes some of the ideas that he would soon develop into his own, more innovative work. 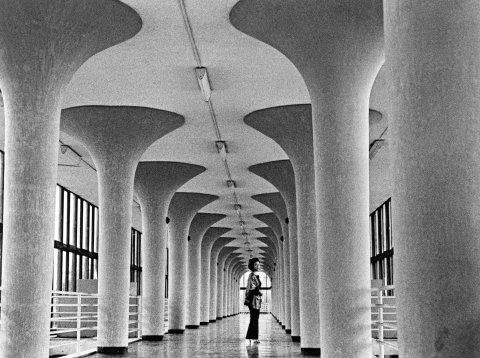 RENGOKU EROICA
R: Yoshida Kijū
MO, 31.10. um 18:00 Uhr: FILMMUSEUM
Shōda Rikiya works as an engineer for Japan’s Atomic Agency. One day, his wife Nanako returns home with a mysterious teenage girl called Ayu, who claims to be Rikiya’s daughter. A man pretending to be the girl’s father arrives to get her back, but he turns out to be a comrade from the revolutionary movement that Rikiya had joined when he was in college. As his everyday life is turned upside down, Rikiya is confronted with his past as a radical revolutionary.
This second film of Yoshida’s trilogy about historical events in 20th-century Japan was, like the other films of the trilogy, made in collaboration with the Art Theater Guild of Japan on a very low budget. Yoshida’s arguably most difficult and enigmatic film is a mesmerizing exploration of political discourses in postwar Japan.
Lacking a clear-cut sequential storyline, the film intersperses various images of sex, politics and revolution and pushes the dazzling cinematic language of Yoshida’s previous film EROS + MASSACRE even further, characterized by a labyrinthine narrative structure, radically decentered compositions and fascinatingly mannered photography. With this esoteric avant-garde film, brimming with Yoshida’s originality, the director also reached his outer limits. (Roland Domenig)

WHAT IS HAPPENING AT VIENNALE CLUB TODAY?

VIDEOS OF THE DAY

Joanna Hogg after the screening of THE ETERNAL DAUGHTER.