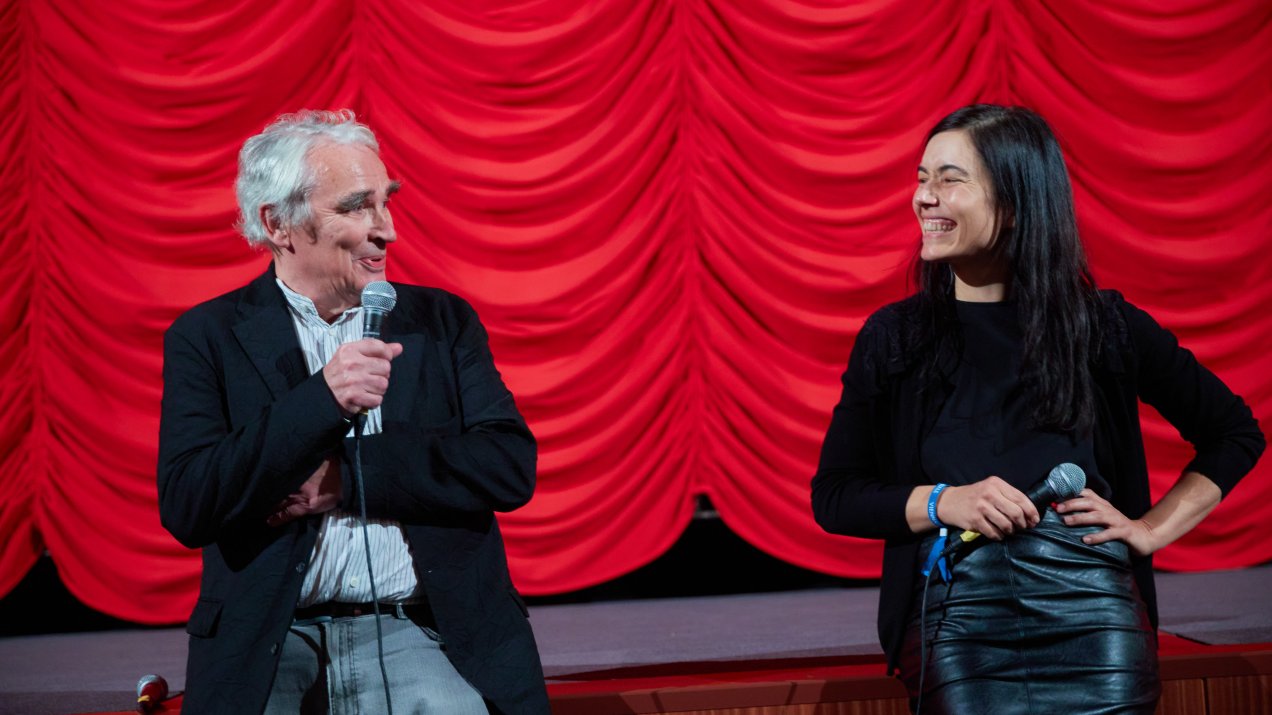 "The camera is cold and objective. To arrive at the truth you have to break it." (Nadav Lapid) 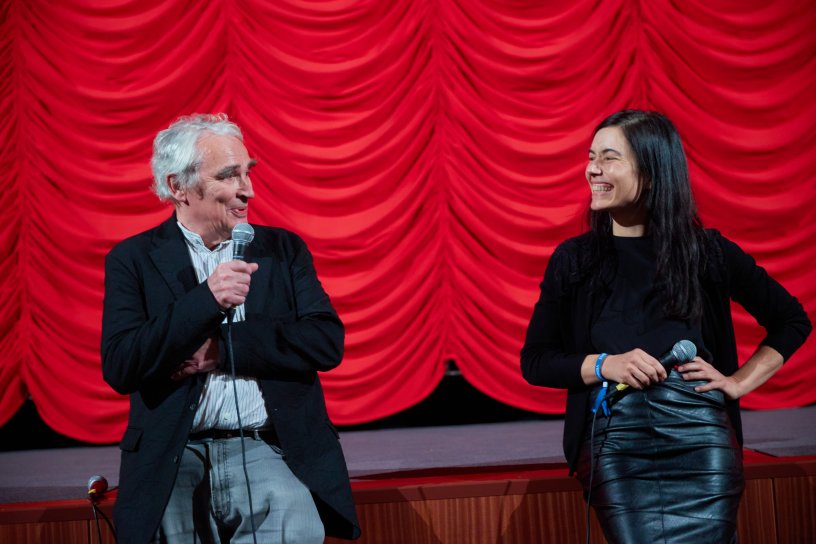 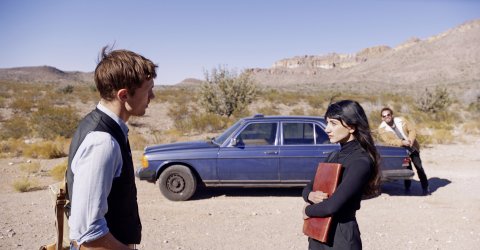 Acclaimed photo and video artist Shirin Neshat is known for her technique of combining handwritten poems in Farsi with her portraits of faces or body parts. Screened at the Venice film festival, her latest film is dedicated to the idea of inscribing the unconscious into the image itself.
LAND OF DREAMS sends Simin, a young woman of Iranian descent (Sheila Vand from A GIRL WALKS HOME AT NIGHT), through the prototypical sprawls of America to survey people’s dreams. As Neshat’s alter ego, she enters their homes and pushes her way towards the unspoken, as the film reveals some long oppressed fears and resentments, touching on racism and xenophobia. But the sceneries stay muted, dreamlike, grotesque (the screenplay is by longtime Buñuel-collaborator Jean-Claude Carrière).
With its unsettling humor, nocturnal car rides, red-lit bars, and lonesome singers, it’s as if Jim Jarmusch and David Lynch had teamed up to fabricate a somber tale of otherness in the US. But Neshat has rooted these dreams in reality. Behind the activities of Simin stands an office with futuristic computer designs, the Census Bureau, that supervises the citizens for their “security”. An Americana as a nightmare. (Gunnar Landsgesell)

In the presence of Shirin Neshat and Matt Dillon. 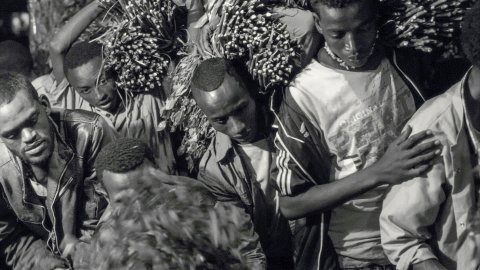 Many Oromo people feel “exiled within their own country” in multi-national Ethiopia. They find solace in their religion, a Sufi brand of Islam. Many also resort to khat, a local plant that has similar effects to amphetamines. Khat is a state of mind as well as the basis for a huge economy in Beshir’s somber FAYA DAYI. The black-and-white imagery is the most apparent distancing effect in this documentary, which somehow creates an immersive effect at the same time.
Several protagonists feature as representatives of a torn community: two young boys dream of passage to Europe, hopefully via Egypt, which already seems very far away. A young woman named Fatima is rejected from a relationship in which she had hoped to find stability. A young man desperately strives not to become like his father, who has fallen prey to khat. Jessica Beshir was born to an Ethiopian father and a Mexican mother and has lived both in Harar in Ethiopia and in New York. With FAYA DAYI, she creates a portrait of her homeland both from the / as well as from the imagined perspective of those consuming khat, which is conjured up with considerable artistry: the film is “stoned” and critical, mystical and sharply observational at the same time. (Bert Rebhandl) 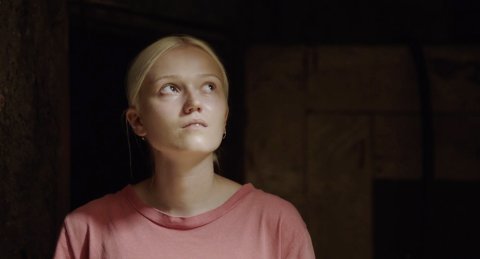 PILGRIMS is a work of fiction that emerges directly from elements of reality: a newspaper article, the space occupied by a small town, and its surroundings. A young man and a young woman drive from Vilnius to a village to find out something.
The viewer is given very little information, and as the film proceeds, we slowly start to understand what happened and what reunites them. There is a sense of familiarity, and of sharing the trauma of a horrible event. They both have a profound need to understand, but they couldn’t be more different. One moves with aggressiveness, the other moves with care, but they both need the same thing: to be in contact with the last people and spaces Matas’ was in contact with, to sink into his waters, to believe that a person’s presence remains beyond death. Where does violence come from? Is it personal? Is it historical? Is it embedded in the land? As they move through the events, Laurynas Bareisa’s film asks itself all these questions, examining not only one single crime, but also larger questions of national identity.
(Lucía Salas)

In the presence of LAURYNAS BAREIŠA. 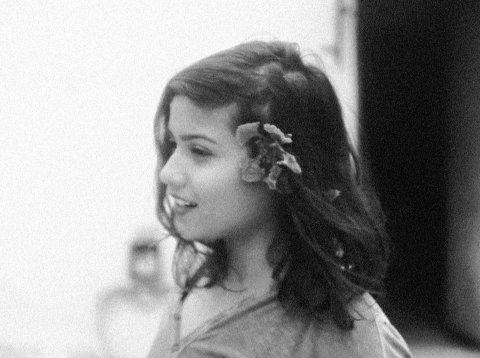 A NIGHT OF KNOWING NOTHING
Payal Kapadia

Letters are found in a box at a film school in Mumbai. They are from film student L. to her lover K. and form the emotional framework for this exploration of untold injustices and youth activism in contemporary India. As L. reads out her letters, a situation at once specific and universal comes into being. Their relationship is intercaste and she is ultimately abandoned by K; the letters switch from being read out in Hindi to Bengali once they are no longer addressed to him. The despair of the growing political situation surrounds them. After several shorts, this feature-length debut announces Payal Kapadia as one of the great poetic filmmakers of today. Neither pure documentary nor fiction, her collage-like filmic textures encompass newspaper cuttings, doodles, and old footage rendered in dreamy black-and-white 16mm. Just as the film is not afraid to foreground darkness visually, silences appear as ellipses, with these absences speaking to so much with consideranle urgency. Among it all are perforations of light, the strength of the protesting students providing hope and solidarity. Ultimately the film is a devoted tribute to cinema, filmmaking, and the resilience of those dedicating their lives to it. (Michelle Carey) 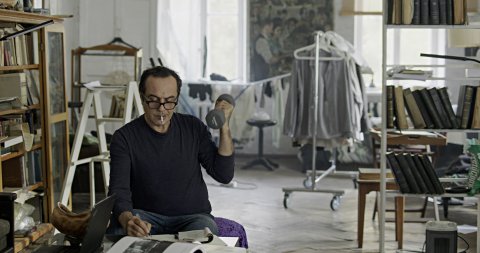 The allegations against literature professor David in DELO are methodological in nature. One invariably thinks of cases like that of Kirill Serebrennikov, the directorial colleague of Aleksey German Jr. whom the government wanted to silence in a comparable way. David has caricatured the mayor of his provincial town in a obviously sexual pose with an ostrich, and action is now being taken against him: he is said to have embezzled state funds for a conference. However, in German Jr.’s farce about Russian distortions of the law, the intellectual is neither impressed by thugs nor by the mob in front of his window. David counters these intimidation attempts with intellectual ridicule and a healthy dose of stubbornness.German Jr., previously known for stylized, multi-layered historical parables like UNDER ELECTRIC CLOUDS, shows a different side of his talent this time: DELO is a chamber piece of intellectual resistance narrated in a surprisingly linear manner that relies on the charismatic subtlety of Georgian actor Merab Ninidze. Almost as important, however, is the setting of the stuffed apartment, furnished with books and devotional items, a place where David’s isolation only grows. Yet it still remains a refuge for a restless spirit that cannot be captured. (Dominik Kamalzadeh)