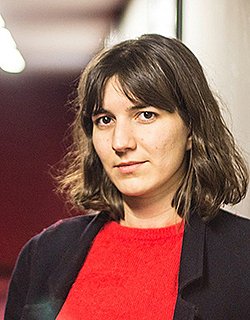 Maureen Fazendeiro (b. 1989) is a french filmmaker and scriptwriter based in Lisbon. She studied literature, art and cinema at Denis Diderot University in Paris and worked for the publishing house Independencia.

She works with film medium and is a member of L’Abominable, an artist-run lab based in Paris. Her collaboration with Miguel Gomes started in 2014 when she worked as casting director for the French shooting of Arabian Nights. She then collaborated as scriptwriter on his next two projects, Savagery and Grand Tour. In 2020 they directed together THE TSUGUA DIARIES.