Back to Shop Overview

The second of the Viennale Edition THE USEFUL BOOK was published due to the retrospective Fritz Lang: «Erinnerungen an Wien». Fritz Lang replied to two young Parisian film critics in 1966 with a very extended text about his heritage, his adolescence and the influence of Vienna on his work. For the first time this text has been published in German language and English translation in its full extense. 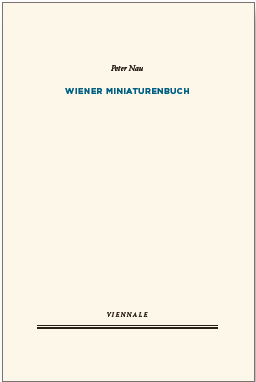 Born in 1942, Peter Nau, author of a series of acclaimed books on cinema has worked at the legendary magazine "Film Critics" for many years. He designed a unique and independent writing form, which he called "miniatures". Naus "miniatures" are small dense descriptions and comments on older and newer films. #4 issued by the Viennale book series THE USEFUL BOOK appears on the occasion of this year's festival. A special selection for the Viennale of 50 previously unpublished miniatures by Peter Nau.