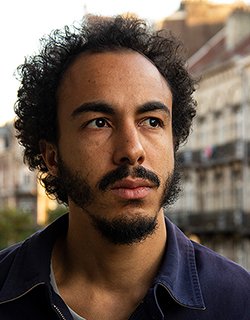 Maxime Jean-Baptiste is a filmmaker based between Brussels and Paris. He was born and raised in the context of the Guyanese and Antillean diaspora in France, to a French mother and a Guyanese father. His interest as an artist is to dig inside the complexity of Western colonial history by detecting the survival of traumas from the past in the present. His audiovisual and performance work is focused on archives and forms of reenactment as a perspective to conceive a vivid and embodied memory. His first film NOU VOIX (2018) was selected in about thirty festivals and art exhibitions and was awarded the Jury Prize at Festival des Cinémas Différents et Expérimentaux de Paris (FR). His second movie, LISTEN TO THE BEAT OF OUR IMAGES (2021), co-directed with his sister Audrey Jean-Baptiste was selected at CPH:DOX (Special Mention), Hotdocs, ISFF Clermont-Ferrand among many others. His next film, MOUNE Ô (2021), is in the process of distribution.