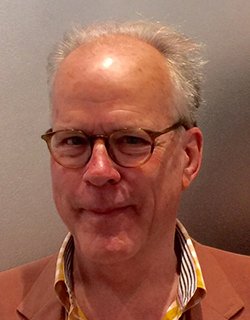 Director of
THE TREE

He was educated in filmmaking at the San Francisco Art Institute, and has been making experimental films since 1975. A longtime resident of New York's East Village, he has ongoing working relationships with the L=A=N=G=U=A=G=E Poets, composer John Zorn, and choreographer Sally Silvers. Since 2005 he has been Visiting Professor at FAMU, the Czech national film academy in Prague. In 2009, he received a John Simon Guggenheim Memorial Fellowship & his films, which are included in the permanent collection of the Museum of Modern Art. His most recent work, ARCANA, was awarded Best Experimental Film at both Curtas Vila do Conde festival in Portugal and the Melbourne International Film Festival in Australia. His films, with an eccentric humor, seek abstraction within sharply-focused naturalistic imagery & the ethereal within the mundane, promoting an active attentiveness through a relentlessly concentrated montage. He currently lives in Vienna.
Films (selection): BALEIRE (1975), GEORGE (1976), NORTH BEACH (1978), KINO DA! (1981), IGNEOUS EJACULATION (1990), OSAKA BONDAGE (1991), MECHANICS OF THE BRAIN (1997, CO-DIR), KING RICHARD (2004), FAILED STATES (2008), HHHH (2016), THE FALLS (2018)