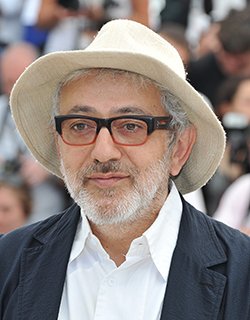 Director of
IT MUST BE HEAVEN

Born in 1960 in Nazareth, is a Palestinian film director and actor. He lived in New York between 1981 and 1993. During this period, he directed his two first short films, INTRODUCTION TO THE END OF AN ARGUMENT and HOMAGE BY ASSASSINATION, which won him numerous prizes. In 1994, he moved to Jerusalem where the European Commission charged him with establishing a Cinema and Media department at Birzeit University. His feature debut, CHRONICLE OF A DISAPPEARANCE, won the Best First Film award at the 1996 Venice Film Festival. In 2002, DIVINE INTERVENTION won the Jury Prize at the Cannes Film Festival and the Best Foreign Film prize at the European Awards. In 2012, Elia Suleiman directed the short film DIARY OF A BEGINNER, part of the portmanteau feature 7 DÍAS EN LA HABANA, which screened that year in Un Certain Regard at the Cannes Film Festival.
Filme (selection): INTRODUCTION TO THE END OF AN ARGUMENT (1990), HARB EL KHALIJ... WA BAAD (1993), CHRONICLE OF A DISAPPEARANCE (1996), WAR AND PEACE IN VESOUL (1997), YADON ILAHEYYA (2002), THE TIME THAT REMAINS (2009), 7 DÍAS EN LA HABANA (2012, segment DIARY OF A BEGINNER)