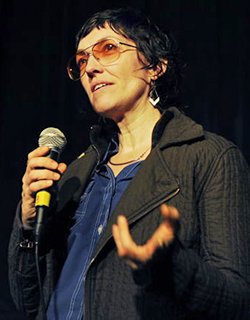 Director of
VEVER (FOR BARBARA)

Born in Washington DC in 1967. She works in a territory between experimental and documentary genres. In her films and frequent work in other media, including drawing, sculpture, sound, photography and small press, she explores the history, uses, mythologies and control of highly varied landscapes, from Muslim Xinjiang China to suburban southern California. Her recent work addresses American constructs of Freedom, the junction between technology and faith and contemporary locations of the supernatural. Stratman teaches in the School of Art & Design at the University of Illinois in Chicago. Her films are regularly screened at the Viennale.
Films (selection): ON THE VARIOUS NATURE OF THINGS (1995, short), THE BLVD (1999), O'ER THE LAND (2009), HACKED CIRCUIT (2014), THE ILLINOIS PARABLES (2016).