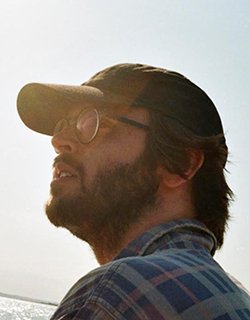 Director of SOME KIND OF INTIMACY

Toby Bull is an English writer & filmmaker currently making work about the legacies of orphanhood. His short films WELCOME TO HARMONDSWORTH (2019) and SOME KIND OF INTIMACY (2021) have screened at over 30 festivals including Visions du Réel, MoMI First Look, Viennale, DokuFest, RIDM, Full Frame, and the Cork, Leeds, Reykjavik & Hamptons International Film Festivals. SOME KIND OF INTIMACY was also awarded Best International Short by the Youth Jury at Black Canvas FCC.

As a cameraperson, editor, and writer, he’s worked with clients such as the UK’s Labour Party & Trade Union Council, Momentum, Compulsory, Brickwall, the BBC and the Francesca Galloway Gallery. He has also acted as a juror for the IDA’s Best Short Award. Before making films, Toby studied English at Cambridge and worked in the music industry, directing an imprint of Moshi Moshi Records. His writing has appeared in Self & Society, 4x3, and 3:AM. He is now developing his first feature, RE-EVALUATION, about his parents’ contributions to a secretive psychotherapy movement that promised to heal childhood trauma by re-enacting it. He’s also developing a series of installation videos exploring audiovisual memory and the archival self as part of The Collective Studio, an artist development program run by The Newbridge Project.