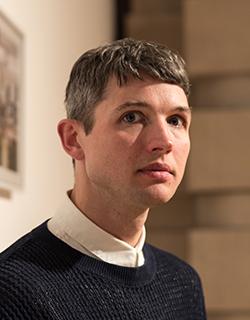 Luke Fowler, born in 1978, is an artist, filmmaker and musician based in Glasgow. His work explores the limits and conventions of biographical and documentary filmmaking, and has often been compared to the British Free Cinema of the 1950s. Working with archival footage, photography and sound, Fowler’s filmic montages create portraits of intriguing, counter cultural figures, including Scottish psychiatrist R. D. Laing and English composer Cornelius Cardew. His previous works include (selection): WHAT YOU SEE IS WHERE YOU´RE AT(2001), THE POOR STOCKINGER,THE LUDDITE CROPPER AND THE DELUDE FOLLOWERS OF JOANNA SOUTHCOTT (2012), FOR CHRISTIAN (2016),  ENCEINDRE (2018).