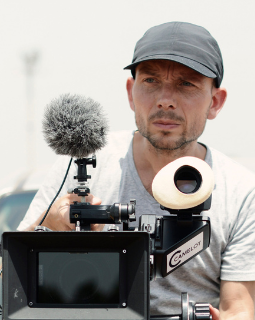 Eike Zuleeg, cameraman and editor, born in Cologne in 1970, has been working as a freelance cameraman in documentary film, theater, feature film and video art since his studies in Karl Walter Lindenlaub's master class at the Hamburg Media School. Many of his works have received awards, including the short film FREEDOM & INDEPENDENCE by Bjørn Melhus, which received the golden LOLA 2015 for the best German experimental short film, and his graduation film MEMORYEFFEKT by Claudia Lehmann, which won the Shocking Shorts Award 2007 and was presented at the Berlinale in the series "Perspektive Deutsches Kino". The film VATER RHEIN on the Day of German Unity 2017 was the first collaboration with Jan-Christoph Gockel and Michael Pietsch, a collaboration that continued with the project THE REVOLUTION EATS YOUR CHILDREN! in Graz and Burkina Faso.