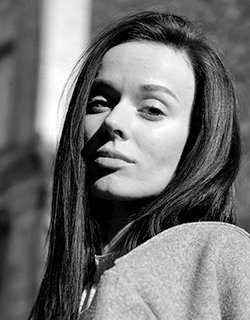 OLEKSANDRA SOROKHAN is a Ukrainian producer. She was the producer of the short documentary “Liturgy of Anti-Tank Obstacles” directed by Dmytro Sukholytkyy-Sobchuk. The film was selected for more than 15 international festivals, including TIFF and IDFA. Producer of the platform for screenwriters Terrarium. She leads the Terrarium platform and has produced 50+ projects, including courses for screenwriters, directors, producers, PR managers, organization of script doctoring with consultants from France, Denmark, Romania, Greece, Poland, and Ukraine on the Terrarium platform. She has successful fundraising experience with the Ukrainian Cultural Foundation grants; partnership with the Adam Mickiewicz Institute, the Goethe Institute, the Ukrainian State Film Agency, the Ministry of Culture of Ukraine, the Grant of the President of Ukraine; experience in attracting private investments from donors. Filmography 2022 “LITURGY OF ANTI-TANK OBSTACLES”, short documentary, 12 min. (directed by Dmytro Sukholytkyy-Sobchuk) 2022 “ACTOR FROM SHELTER”, feature documentary, development stage (directed by Dmytro Sukholytkyy-Sobchuk)