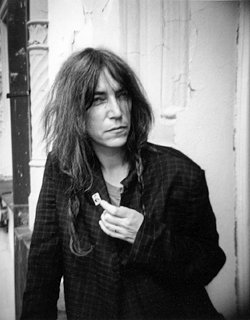 Patti Smith was born in Chicago in 1946, but spent most of her childhood in New Jersey. In 1967 she went to New York and begins a relationship with the photographer Robert Mapplethorpe, with whom she moves to the local Chelsea Hotel in 1969. The pair makes friends with artists and writers such as Sam Shepard, Brice Marden, Allen Ginsberg and William Burroughs. Poetry and drama are Patti Smith's world, she is passionately in search of ways to connect improvisation, politics and rock and roll music. In 1974 she released her first single, Hey Joe / Piss Factory. Together with the proto-punk group Television, she performs in the legendary CBGB club. In 1975, her debut album, Horses, with its famous cover – a photo of Smith made by Robert Mapplethorpe – was international success. In France, it receives the Charles-Cros-record award (1975).

After a serious accident on stage in 1977 Patti Smith has to take a break from her musical career, now focussing on poetry and publishing the collection Babel. The following year she has her first exhibition of drawings at the Robert Miller Gallery in New York. In the same year her album Easter is published, including the hit song Because the Night, which she co-wrote with Bruce Springsteen.

In 1979, she left New York and moved to Detroit, where she marries Fred "Sonic" Smith, the guitarist of the group MC5,in 1980. Initially dedicated to their two children, the couple seeks a comeback in 1988 with the album Dream of Life (including: People Have The Power). After the sudden death of her husband, Patti Smith returns with her children to New York in 1995. In 2005 she was awarded in France with the Commander of the Order of Arts and Letters (Commandeur de l'Ordre des Arts et des Lettres). In 2007 she is admitted into the Rock and Roll Hall of Fame in Cleveland - the most important award for a musician of our time.