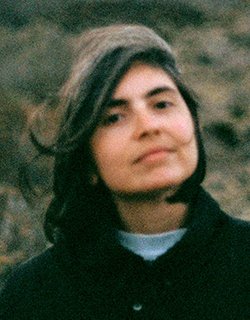 Director of
ELES TRANSPORTAN A MORTE

Has directed, alongside Samuel M. Delgado, IRMANDADE, PLUS ULTRA, BURNING MOUNTAINS THAT SPEW FLAME, NEITHER GOD NOR SANTA MARÍA as well as the installations and performance piece THE GODS ARE ALSO PRESENT HERE, THERE IS NO LAND BEYOND HERE AND EXERCISES IN LISTENING. Their first feature film, ELES TRANSPORTAN A MORTE, was selected to participate in the Ikusmira Berriak program at the San Sebastian International Film Festival and Tabakalera.

After graduating with a degree in Audiovisual Communication, she got her Master in Screenwriting for film and TV from the University of Carlos III in Madrid and a Master in Editing for Film at the ESCAC. She teaches at the ECAM, EQZE and IFIC.