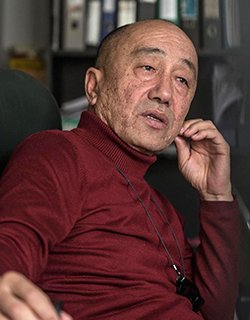 He was born 1958 in Kazakhstan, the village of Uyuk, Zhambyl Region. Having graduated from the Akkol secondary school with a Gold medal 1957, he entered the department of Applied Mathematics at the Kazakh State University. Having worked for two years in his province, in the cities of Taraz and Karatau as a programmer and mathematics teacher, he took interested is cinema. He returned to Almaty, entered the courses of film director assistants, then the All-Union state Institute of Cinema in Moscow (1984), the department of Direction (completed studies in 1987, the film critic department). Scriptwriter and director of the following films: July (1988, short), Kairat (1991), Profession – controller (1993, documentary), Cardiogram (1995), Killer (1998), Road (2001), About Love (2006), Shuga (2007), Student (2012), Poet (2021), Last session (2022, short). His films have won numerous prizes at international film festivals in countries around the world, he is a holder of the orders of Kurmet (Kazakhstan) and Arts and Letters (France).