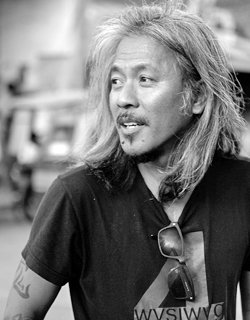 Lav Diaz was born in Datu Paglas in 1958 and is a Filipino film director. Diaz studies at the Mowelfund Film Institute, works for a music magazine and experiments with photography and writing before engaging in film production. He is invited to the competition of the 66th Berlin International Film Festival for his feature film A LULLABY TO THE SORROWFUL MYSTERY. In 2016, THE WOMAN WHO LEFT wins the Golden Lion at the Venice International Film Festival.
Films (selection): HUBAD SA ILALIM NG BUWAN (1999), BATANG WEST SIDE (2001), KAGADANAN SA BANWAAN NING MGA ENGKANTO (2007), MULA SA KUNG ANO ANG NOON (2014), ANG BABAENG HUMAYO (2016)