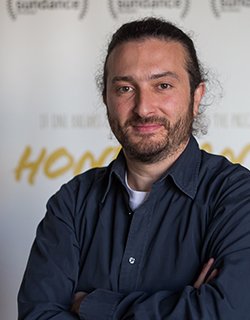 Director of photography of
MEDENA ZEMJA

Samir Ljuma is an Macedonian cinematographer and producer. He worked as DOP on several documentary films and collaborated with various film directors from Macedonia and abroad, including AVEC L’AMOUR Ilija Cvetkovski and HONEYLAND by Tamara Kotevska and Ljubomir Stefanov. He also worked as a producer on several projects for various international projects such as MISHKO. Samir Ljuma won the Best Cinematography award for Honeyland at the Sundance Film Festival in 2019.
Films (selection): YOU MUST KNOW ABOUT ME (2009), ATOMSKATA MRAVKA (2010), OHRID: CITY OF LIGHT (2017), MISHKO (2018), HONEYLAND (2019).