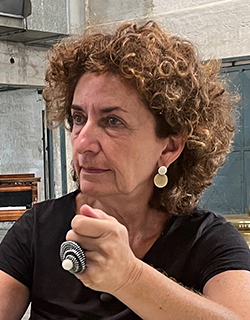 Ruth Beckermann lives as a filmmaker and author in Vienna. Her films include "Die papierene Brücke", "Jenseits des Krieges" and "American Passages". Her film "Those who go Those who stay" received the major documentary film award at the Diagonale in Graz in 2014. Two years later, Die Geträumten was also awarded best feature film there as well. "Waldheims Walzer" received several awards, including the Glashütte Prize for Best Documentary at the Berlinale 2018, as well as a nomination for the Oscars. In 2019, Ruth Beckermann realized the installation Joyful Joyce for the Salzburg Festival. In 2022, her film MUTZENBACHER was screened in the Encounters competition at the Berlinale and was awarded the prize for best film.