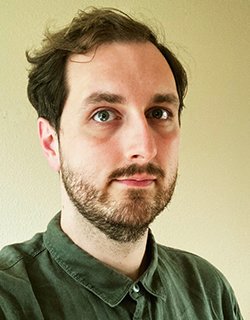 Bram Ruiter (1989) is a filmmaker from The Netherlands. Through a collage-like approach to form, he examines visibility, social behaviour, communal structures, and the act of creation. His 2014 documentary series Super Game Jam was first screened at A Maze Fest in Berlin and went on to be shown at Fantastic Fest in Austin (Texas) among others. In 2019, the experimental machinima Perpetual Spawning won the Critic's Choice award at the Milan Machinima Festival and was exhibited at the HSE Art Gallery in Moscow. Bram resides in Zwolle, The Netherlands, where he teaches a filmmaking course at ArtEZ University of the Arts.