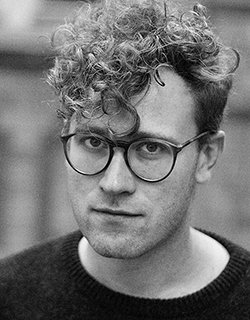 Julian Radlmaier, born 1984 in Nuremberg, is a German-French filmmaker living in Berlin. He studied film studies and art history in Berlin and Paris and then directing at the dffb. Meanwhile, he worked as an assistant to Werner Schroeter and translated and edited film theoretical writings by French philosopher Jacques Rancière. His two medium-length films EIN GESPENST GEHT UM IN EUROPA (2013) and EIN PROLETARISCHES WINTERMÄRCHEN (2014), as well as the feature-length graduation film SELBSTKRITIK EINES BÜRGERLICHEN HUNDES (2017), in which he himself plays the lead role, had successful screenings at festivals worldwide (including Berlinale, Rotterdam, Viennale, Oberhausen, Melbourne, FICUNAM) and received several awards, including the "Preis der deutschen Filmkritik" twice. In 2018, MUBI presented a retrospective of his previous works. The screenplay for his new feature film BLUTSAUGER has already won the German Screenplay Award (Golden Lola) before premiering in the "Encounters" section of the Berlinale in 2021.  At the Moscow Int. Film Festival, it subsequently won the Special Jury Prize (Silbener St. Georg).